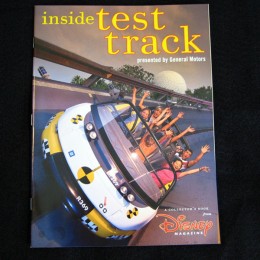 General Motors is in the red and leaking money faster than a fleet of speeding Corvettes burn through gas. Last week the papers even ran a story saying that financial auditors may be forced to declare the company ‘not a going concern’. Needless to say, this has Disney (and their fans) a bit worried about their chances of getting GM to renew their sponsorship of the popular Test Track attraction at EPCOT Center (yeah, I’m old school).

Disney and GM have been in negotiation to renew their 10 year partnership for a couple of years, but their coming down to a deadline sometime this spring. The question is how appropriate would it be for GM to spend money on this attraction when it’s asking the Federal Government (aka taxpayers like you and me) to help bail it out. Test Track is a great promotional vehicle for GM, but will it help sell cars in this new economy?

If GM and Disney can’t come to an agreement, there has been some talk of Toyota stepping in to sponsor a rebranded attraction. If it’s not going to be an auto manufacturer, perhaps it could be a partnership of auto-safety companies (sort of like an auto racing team has multiple sponsors). Disney will certainly want to keep Test Track open for the busy months as it is a huge people eater, but it’s an expensive attraction to operate requiring many cast members, high energy bills, and using lots of tires.

Personally, I’d really like to see them work in more environmentally friendly message even if they keep GM. Do you have any suggestions for the Mouse House?