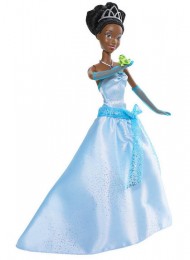 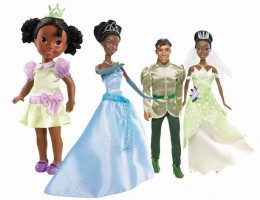 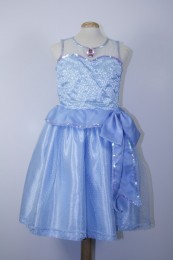 The Princess And The Frog Toy Line
The Princess And The Frog toy line is inspired by the magical elements and characters featured in the fairytale, including the beautiful Princess Tiana, Frog Prince Naveen, a trumpet-playing alligator and a love-sick Cajun firefly. The toys boast vibrant colors such as purple, green, gold and blue, with decorative elements reminiscent of New Orleans and the bayou. New playthings include stunning dolls, imaginative playsets, fun role-play items and costumes and colorful accessories that offer plenty of Disney magic and hours of play for little girls everywhere.

About “The Princess And The Frog”
The Princess And The Frog marks Disney’s return to the warmth and grandeur of 2D hand drawn animation. Set in one of the greatest musical cities of them all, New Orleans, the film teams Ron Clements and John Musker, creators of The Little Mermaid and Aladdin, with Oscar winning composer, Randy Newman. From the heart of Louisiana’s mystical bayous and the banks of the mighty Mississippi comes an unforgettable tale of love, adventure, comedy and heart. Voice talent includes Anika Noni Rose, Keith David, Jenifer Lewis, John Goodman, Jim Cummings, Terrence Howard and Oprah Winfrey.

16 thoughts on “Princess and the Frog Toys Revealed”