For the last few years Star Wars Weekends have brought some pretty nice new Star Wars themed Disney merchandise, or is that Disney themed Star Wars merchandise? Well, I guess it depends on your perspective. But I digress. For many, chief among these were the ‘Big Figs’, Figurines of the Fab Four as various Star Wars characters.

Images of this year’s crop of Big Figs have just been revealed and guess what. This is the final set in the series. (Aside: I hope that isn’t an omen for the future of the event.)

Mickey Luke, Minnie Leia, Goofy Chewie, and Donald in Carbonite will each have an edition size of 600 and will be released around the second week in June. 500 of each will be available at Disney’s Hollywood Studios, with the remaining 100 of each being sent to Disneyland. Retail is expected to be $195.

Star Wars Weekends run Friday through Sunday between May 22 and June 14!

See pics of all four at StarWars.com by clicking on the statue of Minnie below. 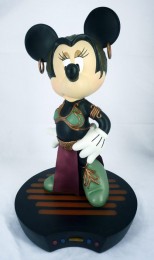