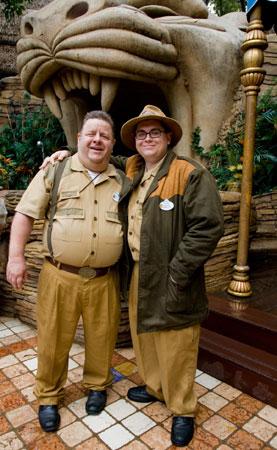 Earlier this year, Jungle Cruise skippers all around the world were preparing their funniest material for a chance at representing their respective Disney Parks in Tokyo this month. Since the attraction debuted at Disneyland in 1955, the skipper role has always been one of interaction and fun, telling the story of the Jungle Cruise through silly jokes.

As part of Tokyo Disney Resort’s 25th Anniversary Celebration, a total of eight Jungle Cruise skippers from Disneyland Resort, Hong Kong Disneyland, Walt Disney World Resort and Tokyo Disney Resort have been chosen to represent their resorts during a nine-day excursion to Tokyo Disney where they will participate in a unique dream opportunity.

In conjunction with the milestone anniversary, the Oriental Land Company, the Japanese company that owns and operates the resort, made 25 dreams come true for Cast Members. The Jungle Cruise skipper dream is one of the most unique being fulfilled. The request came from Kenichi Ito, a supervisor for Jungle Cruise, who dreamt to have Jungle Cruise skippers worldwide gather at Tokyo Disneyland and create an occasion where they could exchange best practices and, of course, best jokes!

In Anaheim, Jungle Cruise skippers Kevin Lively and Mickey Wright were chosen as representatives of the original attraction.

Each finalist had one shot to deliver his or her spiel to the judges. Rain poured down throughout the skippers’ spiels making for a well-themed trip through the rainforest. Although conditions were soggy, the skippers were cool, calm and collected while delivering punch line after punch line.

“All the skippers were terrific, every single one,” said Sklar. “They were all able to use their own unique style during their performances to make the jokes funny every time. We had a tough time deciding the winners.”

The excursion takes place Feb. 27 through Mar. 6, and will include a two-day tour of Tokyo Disneyland and Tokyo DisneySea, Jungle Cruise skipper training on the Tokyo attraction, and the opportunity to present their personal spiel’s to the group.