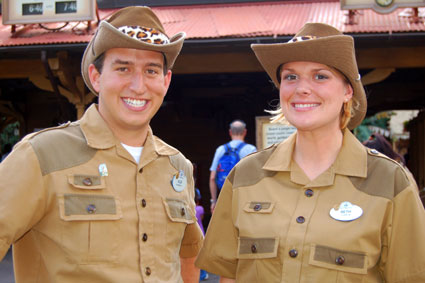 Emerging from their helm in the darkest wilds of the Magic Kingdom, Schafer and Williams earned their overseas excursion thanks to their knack for spinning humorous spiels and stories. They competed against 35 skippers to win their spots, auditioning in front of a panel of judges from Walt Disney World and Walt Disney Imagineering who scored them on performance and punch lines.

Schafer and Williams enjoyed meeting other skippers from around the world to share a common bond. “This was a once in a lifetime experience,” said Williams. “It was incredible to see all these different cultures and different people brought together by such a unique and amazing attraction like the Jungle Cruise.” The visit included a two-day tour of Tokyo Disneyland and Tokyo DisneySea, a meet-and-greet with Tokyo skippers, and a chance to reenact their own Jungle Cruise spiel.

Since its debut at Disneyland in 1955, the Jungle Cruise attraction has entertained countless guests and remains a perennial favorite that has been replicated at Disney Parks worldwide. At Walt Disney World Resort since the park’s opening in 1971, the Jungle Cruise maintains its popularity due in part to the talented boat skippers who thrive on fun and adventure.