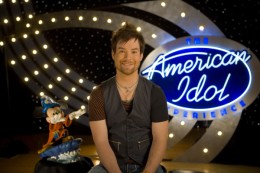 When it opens to the public on February 14, The American Idol Experience will take its inspiration from TV’s “American Idol” and invite park guests to take a shot at performing or take their place in a state-of-the-art theater and vote for their favorite singer. In the finale performance each day, the singer getting the most votes gets a “golden ticket” a.k.a. priority access to a regional audition for the TV show.

As we get closer to the attraction opening, I hope to get you better and more access to the show. To kick things off tonight, we have a short video filmed by current American Idol David Cook about how American Idol and Disney are alike. This was shot just a few weeks after Cook won the contest. Apparently he and Ryan Seacrest have also taped segments from inside the attraction (both during the audition process and the show the guests will see).

Coming later tonight, a tour of the American Idol Experience attraction… well the parts that the public (aka me) can see.