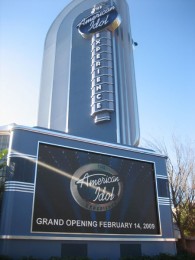 The American Idol Experience Attraction is currently in cast member previews at Disney’s Hollywood Studios and no photos are allowed. That means it’s very difficult to get pictures of the theater and set design. I hear the design looks just like the real thing from the popular TV version of American Idol.

But over the last few weeks, I have been able to walk around and get some great shots that give you a great idea of what you’re going to experience when you do get to see the show.

Up above you see the Marquee for the attraction. It features a giant screen that will be used to broadcast the shows when the theater fills up. It will probably do that frequently as the theater capacity is not that big for a show of this magnitude.

(more of the tour below the cut)

The old ABC Theater is now the Superstar Television Theater. It has a new blueish paint scheme, which goes well with all the shiny chrome. This will actually be the entrance to the interior queue for theater. You can see the ramp at the bottom of the picture. 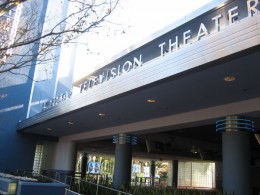 They’ve also expanded the exterior portion of the queue to handle the expected crowds. 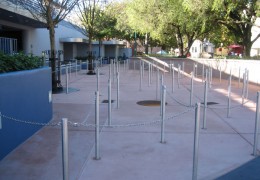 The new paint scheme extends to the restrooms exterior. It’s a nice look. 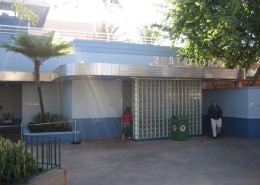 Guests entering the American Idol Experience area either to audition or view the shows all pass by this sign the says video is not allowed, but non-flash still photography is okay as long as it is for private non-commercial use. That’s going to be hard to police. 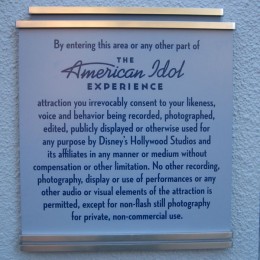 Although the attraction isn’t really open yet, the merchandise location is. Here’s a selection of some of the merchandise available. I think Disney’s done a good job with the product mix here. I really like seeing the pennant and the ‘vote for me’ T-shirts are sure to be popular. (Click to see a bigger version) 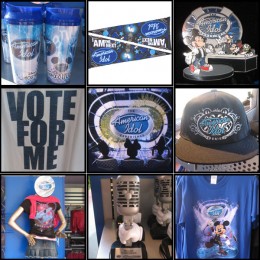 If you head around back of the theater onto Commisary Lane, down by the Sci-Fi Dine In restaurant you’ll see this nicely ornate gate (what no hidden mickeys?). This is the entrance for those wishing to audition for the show in the morning. If they’re still looking for guests, you’ll see cast members in uniform here directing guests where to go and checking for eligibility. 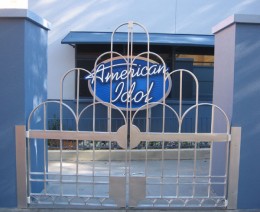 After you’re admitted to the audition process you’ll enter this queue area where you get a chance to read the rules. 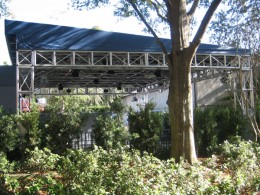 Even if you don’t want to audition, they’ve set up this great ‘photo op’ rec carpet backdrop. I used it and the photos came out great. 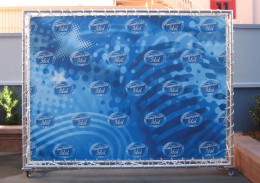 Finally, if you are selected to be on stage for a show, here’s the stage door to which you’ll report 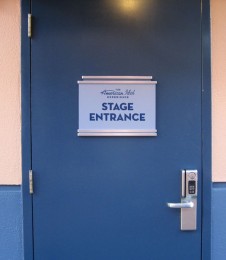 Okay. That’s the tour for now. I hope to get access to the rest of the attraction sometime soon. If I do, I’ll come back with more photos.

The American Idol Experience officially opens on February 14 2009. But soft-openings are expected sooner (no later than January 26th).