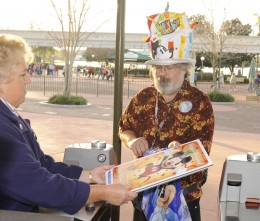 Update: Added video of family in the Magic Kingdom.

Congratulations to Andrew DaCosta who was the first guest to enter any US Disney theme park using the free admission that’s part of Disney Park’s “What Will You Celebrate?” campaign. DaCosta used an oversized park ticket created for the occasion to enter the Magic Kingdom.

DaCosta, who turns 49 today, redeemed his “Free On Your Birthday” registration at the Magic Kingdom Guest Relations window at 7:31 a.m. Jan. 1 is the first day of the “What Will You Celebrate?” campaign at both Walt Disney World Resort in Florida and Disneyland Resort in California.

In addition to offering everyone who visits a Walt Disney World or Disneyland theme park on their birthday in 2009 free admission, the “What Will You Celebrate?” campaign features new theme park entertainment, added celebration experiences and new ways for guests to customize their own “celebration vacation” at both vacation resorts.

Crazily enough Andrew’s feat was first revealed via a twitter post and twitpic from @leannej. Disney later provided the above photo which the Orlando Sentinel picked up for some additional coverage.

More details on the What Will You Celebrate? promotion at DisneyParks.com.