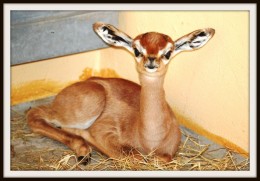 Even with ears that rival Dumbo’s aviation assisting devices, the latest animal baby to be welcomed by Disney’s Animal Kingdom is darn cute. Presley, the 28th gerenuk calf to be born at DAK, weighed in at six pounds and approximately two feet tall, after a seven-month gestation.

A gerenuk, which in Somali means “giraffe-necked,” is an African antelope with a unique long neck allowing them to eat leaves off the tree versus savannah grass. Unlike other gazelles and most antelopes that graze on grasses, gerenuks often stand erect on their hind legs and stretch their long necks to browse on taller bushes. They are typically found in areas of dry, bushy shrub and because of their arid habitat, they do not need to drink, because they get enough water from the plants they eat. Typical size for an adult gerenuk is approximately three feet at the shoulder with a weight between 80 and 115 pounds.

The female calf, just recently named Presley, was born November 16. Her mother, Tupelo, is six years old and has been at Disney’s Animal Kingdom since 2004. Both are part of the Association of Zoos and Aquarium’s Gerenuk Population Management Plan.