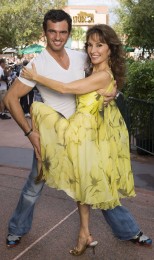 Susan Lucci, Emmy Award-winning star of the ABC Daytime drama “All My Children,” strikes a pose with her “Dancing with the Stars” professional dance partner, Tony Dovolani, Nov. 15, 2008 at Disney’s Hollywood Studios. Lucci and Dovolani, who were eliminated from “Dancing with the Stars” on Nov. 5, appeared at “ABC SOAPnet Super Soap Weekend,” a soap opera fan event held this last weekend at the Walt Disney World theme park.

2008 marks the last year Super Soap weekend will be held at the Walt Disney World resort. In 2009 plans are to have six regional events around the country.