Rev. Run from hip-hop legend “Run-D.M.C.” at the Magic Kingdom

Everyone once and a while Disney releases these celebrity moments from inside the park. This week we find Hip Hop Legend Rev Run enjoying a spin at Walt Disney World. 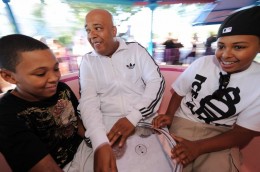 Hip-hop music pioneer “Rev Run” from the MTV hit show “Run’s House,” takes a spin Nov. 8, 2008 on the Mad Tea Party attraction at the Magic Kingdom in Lake Buena Vista, Fl. with his sons Russy (left) and Daniel (right). Russy and Daniel co-star on “Run’s House” along with the rest of Rev. Run’s family. Rev. Run, known for being one-third of the legendary hip-hop group “Run-D.M.C.,” and his family are on vacation this weekend at the Walt Disney World Resort. “Run’s House” is currently in its fifth season on MTV.