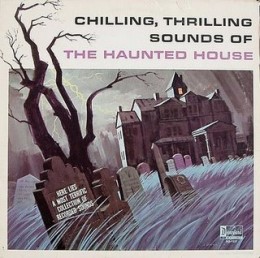 In 1964 the facade of what would become Disneyland’s famous Haunted Mansion sat empty, unoccupied by any of its future ghostly residents, waiting for Imagineers to return from other projects to finish the attraction. But that same year, perhaps to remind the public that the Haunted Mansion would be opening some time in the future, Disneyland Records and the Walt Disney Sound Effects Group released the classic sound effects record “Chilling, Thrilling Sounds of the Haunted House” (itunes link).

I had this album as a kid and pulled it out every Halloween to scare myself silly. Now that Disney has released the album on iTunes you can recreate that foolish terror for yourself. Since its release the album quickly spooked its way to the top of the Disney music charts.

A big thanks to Disney for releasing this to the public again!

Updated: a few similar tracks are available on Amazon as MP3 downloads.