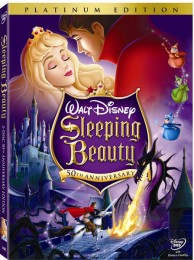 Walt Disney’s Animated Masterpiece Sleeping Beauty 50th Anniversary Platinum Edition has been remasterd and re-released on DVD and Blu-Ray. Each frame of the original fairy-tale classic has been painstakingly recreated to Walt’s original specs. That means you’ll get to see the movie in a way hidden from audiences since the original theatrical release.

On the plus side this means that you get to see characters and detail that were previously cut from the widescreen version of the film. On the bad side, that means that the letterboxing is extreme. So unless you have a fairly good sized TV, you’ll be squinting a bit to take it all in.

Also updated were the rich color palette of the original film. We’ve all grown used to a somewhat dulled version with deep blues and greens. But the remastered version reveals purples, reds, bright greens, and other amazing colors that add a whole new depth to the film. I do have to big complaints in this area however. The greens tend to be a little on the puke green side and the pinks now tend to be more red. This is particularly bad in the famous pink or blue dress fight.

That said, the small errors are mostly overwhelmed by how rich and detailed this restoration is. To see the master animators at work, the detail of the backgrounds, and the hear the masterful soundtrack in a whole new level of high definition makes all the difference.

Even if you already own Sleeping Beauty, which we did, there are plenty of new extras that make this worth adding to your collection. My number one favorite is the featurette on the Original Disneyland Sleeping Beauty Walk-Through Attraction With Walt Disney Imagineering. It’s a fully-immersive 3-D experience recreating the original Sleeping Beauty Castle Walk-Through that Walt supervised over 50 years ago.

The full DVD details are below the cut:

Prepare to Awaken Your Senses…

Finally Releasing from the Disney Vault — on DVD and for the First Time EVER in High Definition!

Releasing from the Disney vault at last… and marking the first-ever Disney Classic Animated feature in high definition, Walt Disney Studios Home Entertainment proudly awakens Walt Disney’s original Sleeping Beauty with a spectacular 50th Anniversary Platinum Edition— on October 7, 2008, only for a limited time. Debuting on 2-Disc Blu-ray™ Hi-Def and an a 2-Disc Platinum Edition DVD, the highly-anticipated release heralds the beginning of an exciting new era for Disney’s “Platinum Edition” series allowing viewers to see more than ever before in an all-new edition that will never be seen again, and launches the all-new Disney BD-Live Network. It provides the chance for viewers to combine some of today’s most popular interactive communications platforms – chat, video messages, online interactivity, communal gaming and more – along with their most treasured home entertainment experiences.

The royal debut of Sleeping Beauty on Blu-ray also marks an industry first, as the 2-disc Blu-ray release includes a bonus standard definition DVD of the classic animated film, in the same package. This allows fans of all ages who have anxiously awaited the Platinum Edition DVD release to own the beloved family favorite on standard def DVD while they are preparing to upgrade to spectacular 1080p Hi-def Blu-ray and experience the exciting Disney BD-Live Network.

The must-own home entertainment event of the year The Blu-ray hi-def debut of Sleeping Beauty is accompanied by the awakening of the timeless classic on a 2-disc DVD, also in a 50th Anniversary Platinum Edition. Both exciting releases are loaded with magnificent all-new bonus features for the whole family that capture the magic, fun and history of one of Walt’s greatest achievements.

Restored to dazzle new fans with its pristine picture and sound quality, the final fairy tale to be produced by Walt Disney himself, the Sleeping Beauty Platinum Edition is a spectacular widescreen event that transports viewers to a magical kingdom. Filled with romance, adventure and humor, the beloved animated classic’s 50th Anniversary release celebrates the exhaustive work of The Walt Disney Studios Restoration and Preservation team who have successfully mastered the meticulous processes of creating stunning technologically-advanced Hi-Def productions from classic footage created by Walt Disney and his team in the first golden age of animation.

One of the studio’s most ambitious undertakings, Walt Disney’s original animated Sleeping Beauty features an Academy Award® nominated score adapted from the incandescent music of Peter Tchaikovsky. Its breathtaking action sequences and extravagant musical production numbers charm adults and children as they delight at the antics of Flora, Fauna and Merryweather, the bubbly and bumbling fairy godmothers, and cheer the gallant Prince Phillip in his quest to save Princess Aurora.

· Original Disneyland Sleeping Beauty Walk-Through Attraction With Walt Disney Imagineering – A fascinating fully-immersive 3-D experience recreating the original Sleeping Beauty Castle Walk-Through that Walt supervised over 50 years ago. Viewers can choose to tour the attraction in “Auto Mode,” where you get to experience it the way it was originally intended, or choose to view the experience with “Commentary” by Disney’s famed “Imagineers” and take a look behind the magic of these detailed dioramas.

· Alternate Opening – Recently discovered storyboards from 1952 reveal that the original opening of Sleeping Beauty was planned as a big musical production number. Using all of the existing color storyboard art, this alternate opening is recreated with a new demo recording of the song – “Holiday.”

· All New Documentary “Picture Perfect: The Making of Sleeping Beauty” – an exciting and inspiring behind-the-scenes look at the creation of the final fairy tale to be produced by Walt Disney himself.

· Grand Canyon (Featured in HD on Blu-ray™) – This Academy Award® winning short accompanied Sleeping Beauty in its release in theatres.

· The Peter Tchaikovsky Story (Featured in HD on Blu-ray) – An episode of Walt Disney’s legendary TV series in which Walt previews the Studio’s upcoming release of Sleeping Beauty which uses the Tchaikovsky score as the source of its music. Also included is a dramatic re-enactment of how Tchaikovsky came to write his score for the ballet.

· Four Artists Paint One Tree (Featured in HD on Blu-ray) – This featurette looks at one tree interpreted by four distinguished Disney artists, including Eyvind Earle, the well respected American painter who served as stylist for Sleeping Beauty.

Everything on the DVD, Plus…

· Maleficent’s Challenge – Go head to head with one of Disney’s most infamous villains. Think of anything in the world and Maleficent will read your mind. Keep your wits about you, for that is the only way to defeat her.

· Restoring The Sound Track – This featurette will cover the creation of the all new 7.1 mix of the score of Sleeping Beauty that was done exclusively for this Blu-ray release using the source tapes from the original recording sessions resulting in an audio experience of superior quality with greater detail and fidelity than you have ever heard before.

· Customized Living Menu – This menu is exclusive to Sleeping Beauty Blu-ray Disc owners only. It is a “real time” virtual castle that magically changes based on the viewer’s location, time of day and current weather forecast (requires Live enabled players). If preferred, viewers will also have the ability to manually change the castle’s weather to match any of the Magic Kingdom Castles around the world.

o Movie Chat – Communicate with your remote friends on-screen while in a synchronized viewing party using your remote control or any text enabled device such as a laptop, desk top or any PDA device such as a Blackberry, iPhone or most other regular cell phones. Your chat session will appear over the movie and occur in real-time while watching the movie together.

o Movie Mail – Blu-ray owners will be able to record a personalized video message of themselves, superimpose that capture onto one of many pre-selected clips of the movie, and send it off to a friend, colleague, or relative. This specific feature enables the Sleeping Beauty Blu-ray Disc owner to personalize a very special greeting as never before.

o Movie Challenge – Users will be able to test their skills against other players in a synchronized, real-time, online trivia game while watching Sleeping Beauty with anyone online. Movie Challenge is always active no matter what time of the day it is, and there will always be a game in progress.

· A DVD of Sleeping Beauty –Blu-ray owners will also receive a special bonus DVD of the movie!