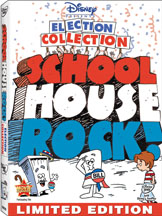 As all eyes turn to the presidential election it’s time to rediscover the infectious music, witty lyrics and colorful animation of Schoolhouse Rock! The Election Collection. The blast from the past comes is available on DVD September 23, 2008 from Walt Disney Studios Home Entertainment.

It couldn’t be a better time for this collection of classic election-themed tunes including “I’m Just a Bill,” “Shot Heard ‘Round the World” and “I’m Gonna Send Your Vote to College,” the timeless songs that taught a generation of Americans that learning can be fun! The limited edition DVD also features the entertaining new to DVD song “Presidential Minute” with two surprise endings and an exclusive Election Tracking Kit with stickers to help viewers keep track of the actual voting results in all 50 states.

Remember Saturday mornings past at the ABC Network, when a series of three-minute animated shorts harnessed the power of music to educate children of all ages? From 1973 until 1986 and the early nineties, Schoolhouse Rock! used catchy music and sassy lyrics to teach kids the basic principles of grammar, arithmetic, history, science, government, computers and money management. The show became a smash hit and won four daytime Emmys (Outstanding Children’s Instructional Series, 1976,1978, 1979 and 1980) and one daytime Emmy nomination (Outstanding Children’s Instructional Series, 1977) for its charming and informative musical lessons.

This is the second DVD in the Schoolhouse Rock! series. Watching each was a like being in my own personal time travel machine since I grew up when these shorts were first hitting the airwaves. Schoolhouse Rock! The Election Collection holds up through time and will introduce today’s youngsters to important information, refresh the holes left by high school civics classes, or provide a moment of pure nostalgia for grown up fans of the show.