A Monorail in every town 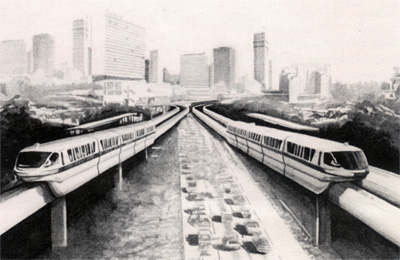 Long before it was a joke in The Simpson’s, the mass-transit system known as the Monorail offered real potential as a solution for what was seen as a nation’s over-dependence on foreign fuel and heavy traffic. If that image up there doesn’t make you long for a monorail transit system, then perhaps the full brochure that’s been posted on Progress City will.

Community Transportation Systems was a division of the Walt Disney Company set up to market the Disney brand of Monorail. This 1979 brochure could be used today with just a little updating. Perhaps it has been, because the city of Anaheim recently talked of adding a Monorail from the Disneyland area to the Angel’s Stadium area (a good start if you ask me).

Also, as I suggested earlier, The Walt Disney Company should consider forming a partnership to fulfill Walt’s vision of an I-5 Corridor Monorail.