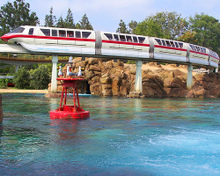 A top priority is seeking funding from private businesses to build a monorail running from the Disneyland area to the proposed Anaheim Regional Transportation Intermodal Center, east of Angel Stadium in the Platinum Triangle, which the city is trying to turn into an urban village.

Pringle said a monorail would “symbolically and technologically bring Walt Disney’s iconic vision of 50 years ago alive today and bring a physical connection to the various destinations in our city.”

This was a long time vision of Walt Disney himself. I certainly hope the Walt Disney Company of today gets on board with making it a reality.

Here are a few tips I offer to Anaheim officials. Go to Las Vegas and learn from the mistakes they’ve made. The monorail needs to be Front of House, not hidden off the strip somewhere. Encourage ridership by making the stations easy to find and access. Also, don’t charge exorbitant fees to ride. You practically have to take out a loan to ride the Las Vegas Monorail making it just slightly cheaper than what a taxi would have cost you, but much less convenient. There has to be value in using the system, not just novelty.