Eden Espinosa, Disneyland Alum, coming to big screen near you in RENT

Eden Espinosa, Disneyland entertainment alum, will be coming to a movie screen near you in her role of Maureen in RENT. But wait you say, hasn’t the movie version of RENT already hit the cineplex? Indeed it has. This will be a one time event that will capture the Broadway version of the hit stage musical as it makes its final few performances on the great white way.

Before we go any further – a confession. I am a RENThead. From the first night I saw the Original Broadway Cast, to my 9 times seeing the show (6 times via the RENT line) when it was on tour in LA in 1997 (Neil Patrick Harris was an amazing Mark Cohen, btw), to multiple viewings of the film version; I watch with glee, sing all the songs, and find myself constantly inspired by Jonathon Larson’s powerful work and tragic early death. 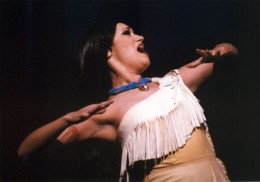 It so happens that during the same time frame, I was a frequent audience member at some of the best entertainment options Disneyland has ever offered. The Hunchback of Notre Dame: Festival of Fools, The Spirit of Pocahontas, and before those Beauty and the Beast set the bar for quality stage entertainment at Disneyland. Since Disneyland was located so near to Hollywood, the level of talent in these shows was often quite high, which made it easy to be a fan of the shows and of certain performers.

Alright, back to RENT. Idina Menzel originated the role of Maureen in her Broadway debut. I saw Idina in the original Broadway cast of RENT back in 1995 and fell in love with the show. Beginning at about the same time, Eden Espinosa was a featured performer in The Hunchback of Notre Dame, The Spirit of Pocahontas, and, even later, Animazement!. I remember thinking then that Eden could easily play Maureen in RENT. So it was no surprise to me that Eden’s first Broadway role was as understudy to Idina Menzel’s Elphaba in the musical WICKED. That’s not to say that Eden is any less of a talent than Idina, Eden’s breakout role in BKLYN and subsequent work on her own shows she is a talent worthy of additional leading roles all her own. I expect to see a lot more from Eden as time goes on.

Now, I can’t wait to see Eden in the role of Maureen in RENT. If I had known that she was on stage in NYC in the role, I would have made every effort to get up there earlier. But this special film version is a happy surprise and now I must hope that when the Sony Pictures owned “The Hot Ticket” picks locations, it includes one in Orlando (otherwise I may come begging to sleep in your house if it’s playing near you).

Any other Disney fans out there share my love of RENT?

See more at Playbill and The Hot Ticket.