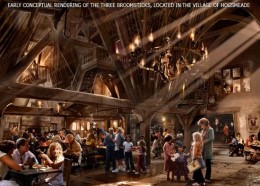 When “The Wizarding World of Harry Potter” opens at Universal Studios Orlando’s Islands Of Adventure it will be the biggest draw yet for a non-Disney attraction. The concept art above is the just announced restaurant for the land, “The Three Broomsticks”, which can be found in the town of Hogsmeade in the books. You can learn more and vote on what type of wizardly drink you would like to have at www.universalorlando.com/harrypotter. This new land is scheduled to open in 2010.

If you can’t wait that long, then you’ll be happy to know that author J.K. Rowling has written another book with characters from the Harry Potter universe – The Tales of Beedle the Bard. This book of fairy tales was written to supplement the Harry Potter series and will be published in two new editions, Standard and Collector’s Edition. The Tales of Beedle the Bard by J.K. Rowling is available for pre-order at Amazon.com with delivery scheduled for December 4, 2008. The best part of the deal is that Rowling will be donating her proceeds from this book to her children’s charity.

Just this week the trailer for the next film “Harry Potter and the Half-Blood Prince” has hit the internets. The films get darker and darker and this time there are a lot more flashbacks where we learn about the origins of Lord Voldemort.

The film hits the theaters this November 21st.