LAX’s Theme Building Getting Some TLC 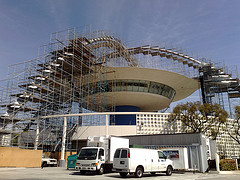 The Theme Building at Los Angeles International Airport is that iconic arched structure with the round observation deck and restaurant in the middle. I remember hearing that it was in need of some repairs, but I had now idea how extensive it would be. LA Weekly’s article shows pictures of the structure almost completely encased in scaffolding. Wow.

“Encounter”, the restaurant, has the distinct honor of being one of the few non-Disney establishments designed by Disney Imagineers. I also remember when that was announced. Working for outside projects was going to be one way Walt Disney Imagineering could pay for itself in between theme park projects. The idea never took off. Instead WDI has seen round after round of layoffs as various leadership teams swept through and attempted to remake WDI in their vision.

It’s not cheap to do the things that WDI does so well, but it is a large part of what separates Disney from the pack. I’m keeping my fingers crossed that as Pixar continues to show that putting story and quality first makes a difference, that John Lasseter will be allowed to bring more of that philosophy back to WDI along with a host of new and exciting projects, perhaps including some outside work like “Encounter.”