You may have heard of the Mini-Cooper, well here is the Mini-Trooper. 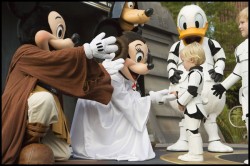