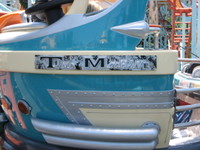 Yesterday the news featured a story about how Disney’s Animal Kingdom will be making some changes to the Primeval Whirl roller coaster that might prevent any future serious injury or deaths resulting from cast members being in off-limits places while the attraction is in motion.

It’s a two part fix. They’ll be making changes to the load/unloading platform in length and safety markings. But they’ll also be adding sensor pads to the ‘off-limits’ areas that will automatically “e-stop” the attraction should someone step on the pad.

I haven’t been on many Disney attractions recently, but those ‘sensor pads’ seem to be appearing all over the place. At the Magic Kingdom I noticed Splash Mountain, Haunted Mansion, and Snow White all have them now. I’m sure there are more attractions I just didn’t ride. So it doesn’t surprise me that Disney has added them over at DAK too.

In the some of the dark rides, by which I mean darkly lit, it’s okay because you’re not really looking at the floor; but in Snow White and Splash Mountain it is fairly obvious when you see them and it does throw the theming off a bit. An observant guest can just avoid stepping on the pad since they’re pretty obvious.

I know they have the technology to build these sorts of sensors into the floor since it’s in use at at least one attraction at Disneyland. Plus they also have ‘infrared beams’ that also e-stop the attraction in use at various attractions (Spaceship Earth comes to mind). So I wonder why they’ve switched to these very obvious pads.