Disney’s Pirates Of The Caribbean MMORPG looks to grow 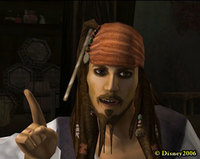 The Walt Disney Company hasn’t released any official numbers, but the MMORPG tracking site MMOGChart estimates that Disney’s Pirates Of the Caribbean online game has about 10,000 active players. It’s a good number, but not impressive in an age when video games are outselling their movie-theater counterparts. So Disney has announced plans to add new content to the game and increase inter-player communication.

Now, I haven’t logged into the POTC MMORPG myself. But I have played a few other MMORPGs in my day and I know that player interaction is one of the big reasons for joining up (the other being how rich a world has been built). Right now Pirates of the Caribbean is rated E10+ by the ESRB which means suitable for everyone 10 and older. There has been some debate recently about whether the game is even appropriate for the pre-teens which it is attracting. Disney may find that by making the game PG-13 they can allow more player interaction and attract more long term customers.

Any existing players wish to chime in in the comments?