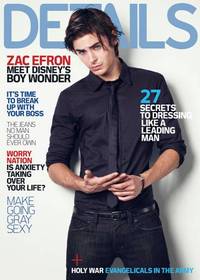 It’s time to get your head in the game as Disney has announced that the cast of High School Musical has been reunited for the third film in the series. Instead of debuting on The Disney Channel, like the previous two films, this installment will go direct to theaters hoping to capitalize on the fans desire to see the characters they love experience their senior year.

Alas, there is a rumor going around that the failure of the studios to negotiate in good faith with the writer’s guide may affect production on the third film. So it’s a question if they’ll be able to meet the release date of October 24th.

That said, the star status of a few members of the cast continue to rise. In particular Zac Efron’s star appears to be climbing the highest. This month he’s featured on the cover of Details magazine with an article that dishes on some of what it’s like to be him. He seems to be really down to earth, actually. I just hope they don’t make him do one of those "Sound Of Music" songs again in the third film.