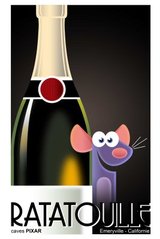 has won the hearts and minds of audience and critics alike. It’s the best reviewed wide-release film of the year and shoe in for an Academy Award. The dilemma for Disney is which one? A bid for the Best Picture Oscar, which it deserves, could short circuit its bid for the Best Animated Picture award.

One strategy Disney could take is to try and position the Best Animated category as another ‘skill’ award, Much like Best Cinematographer or Best Director, where the award goes to the ‘team’ responsible for the film instead of the film’s producers as does the Oscar for Best Film. This would also make sense as the definition of what is animated continues to expand (it now includes Motion Capture).

Not sure what will help Ratatouille

win both categories this year. But it certainly deserves to win both. Read this article in the NY Times for more background on the problem Disney is facing.