I’m finally getting a chance to catch up on some of the posts I wanted to write but was too sick to get to. There has been some amazing experiences the last month, but none topped the trip to Cape Canaveral and Kennedy Space Center. So why not start with that.

The event was organized by PR and Social Media guru Josh Hallett for the session leaders and PR industry leaders attending BlogOrlando. Session leaders were not paid for their services and in fact had to pay their own way, so having this day added to the experience helped make the weekend complete.

I had never been to KSC before and really didn’t know what to expect. It turns out that the attraction, just a short 1.5 hours from Walt Disney World, is really more like a mini-theme park with the added plus of 40 years of history to tour like a 40 square mile living museum. I took so many pictures I eventually had to stop just from the awe. Epcot may have a simulation of space, but KSC is the real mission space.

Not only did we get the chance to explore the attractions area of the KSC Visitor Center, but we saw a great IMAX 3-D movie on the USA’s adventure to the moon, have lunch with a Space Lab Astronaut, and then we launched onto a long bus tour that goes places where the day guest just doesn’t usually get a chance to go.

The tour ended at the huge Saturn V building which rivaled any awe-inspiring experience I’ve had in my life. Seeing how man was able to make 2 million parts and systems work together to launch that huge rocket into space with three men perched atop it on a mission to the moon is a real highlight of the trip.

A huge thanks to Josh Hallett for pulling this together and to the fine folks at Delaware North
Company and Kennedy Space Center for arranging the day.  If you’re interested, I’ve put some of the days photos below the cut.

A Day At The Kennedy Space Center 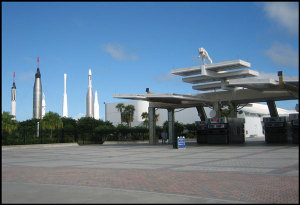 KSC Visitor Center Entrance. I love how the rockets tower in the background. The shade coverings replicate solar panels like they’re using on the space station. It’s too bad they’re fake. Real solar panels might save the KSC some money. 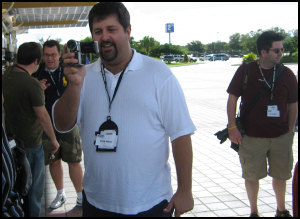 Josh Hallett on the right and Chris Heuer with the VC. Chris gave a wonderful closing session at BlogOrlando and was a joy to have along at Epcot for the Food & Wine festival. 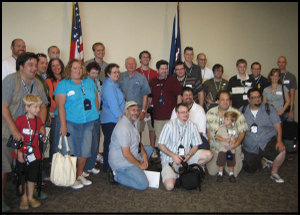 Group photo after Lunch with an Astronaut. That’s him there in the blue shirt standing up in the middle. 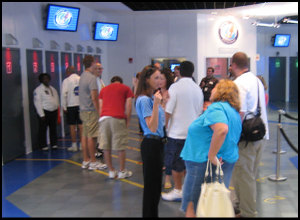 KSC just added a new attraction called "The Shuttle Launch Experience". I didn’t get to ride it due to my back injuries, but I was able to follow along via the view screens that were installed for guests unable to ride. More attractions should do that. Very nice. 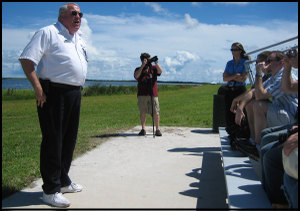 Our tour guide was not just knowledgeable about KSC and the Space Program, he was a life long fan. I can admire someone like that. 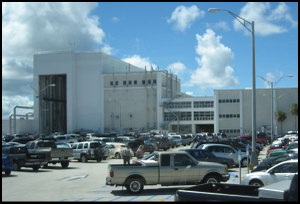 Although you’d think driving by some of the admin buildings would be boring, it wasn’t. Especially when you get to see a Gator in the process of having a bird over for lunch. 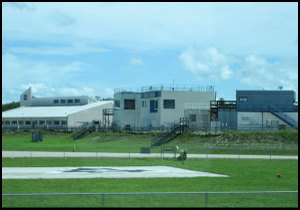 We drove by the media perch area for shuttle launches. I would have liked to explore that area. But I’m a media geek. 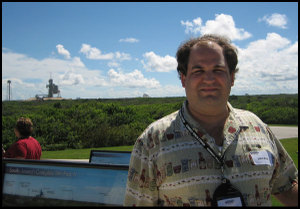 We were able to drive right up to the base of the Shuttle Launch Pad, but we couldn’t get out. This was as close as they’d let us get out and walk around. Still pretty amazing. That’s launch pad 39A back there behind me. Right now the shuttle is sitting on that pad ready to blast into space. Good luck to the crew! 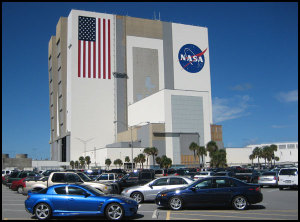 The Vehicle Assembly building (wikipedia). Undergoing a few repairs right now. It’s 52 stories tall, which is the height of the building I worked in when I worked in downtown Los Angeles. But the volume of the VAB places it among the three largest buildings in the world. 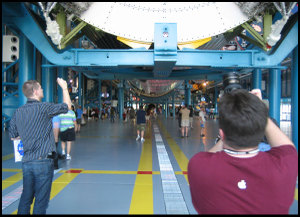 A Saturn V rocket laid on its side. You can’t get the scale from a photo. Among all the reasons to visit KSC, you have to make sure to visit the Saturn V building.

It was a long amazing day, I was not feeling my best at all, but the friendly staff, awe inspiring attractions, and great crew of BlogOrlando folks made it all worth while. Thanks everyone!