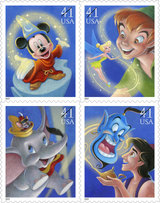 USPS will be debuting the next set of four 41 cent Disney Character stamps this Thursday at Walt Disney World. The Postal Service honors the theme of magic as imagined by Walt Disney and his studio animators in the fourth in the Art of Disney stamp pane series. Now, with help from a few beloved Disney characters, it’s easy to add a dash of magic to your cards and letters with stamps that feature Dumbo and Timothy Mouse, Peter Pan and Tinker Bell, Mickey Mouse as "The Sorcerer’s Apprentice," and Aladdin and Genie.