Epcot Wand Coming Down, no really! 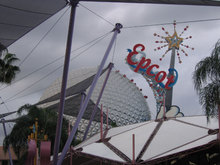 Saying its time had come Epcot’s Vice President Jim McPhee announced that starting this Monday work would begin on dismantling the Giant Wand, Mickey Hand, and other decorations that have festooned Spaceship Earth, the geodesic sphere that serves as the symbol of the park.

The roots of Epcot lay in the significance of its symbols and their
connection to a better future. Imagination, Motion, Living Seas, The
Land, and the pavilions that followed all tied to the concept of one
planet, one Spaceship Earth upon which we live and must learn to share
to survive. The decorations and clutter foisted upon the Buckminster
Fuller inspired geodesic sphere became symbolic to Epcot’s fans of how
far The Walt Disney Company had strayed from the park’s original
roots.

Originally erected as part of the Millennium Celebration the wand read 2000 and was tied into the spirit of world unity that centered around the turning of the century.  When it no longer made sense to read 2000, and not wanting it to act as a giant calendar, the park changed the signage to read Epcot in a stylized font.  This move turned the wand into essentially a big marketing gimmick of a signpost. The removal of it now, puts the meaning back on Spaceship Earth as symbol for the park.

A few months ago the rumor was that Disney was going to leave the wand up, but that the new sponsor of Spaceship Earth, Siemans AG, wanted it removed. Seems kitsch wasn’t inline with their corporate image.  So next time you see a Siemans employee give them a little thank you message.

On a related note, new Epcot managment sure knows how to get a guy’s hopes up. In the Orlando Sentinel article McPhee is reported as saying that

with Epcot’s 25th anniversary this fall, and the temporary closing of
Spaceship Earth ride, MacPhee said, "We think the timing of the removal
is right."

Wait! Did he just say Epcot’s 25th Anniversary? The previous VP Brad Rex had stated in an interview that there would be no celebration of Epcot’s landmark achievement. That was subsequently confirmed. Maybe a new VP means we’ll get our wish for something this Fall.

Don’t get your hopes up (I have once source saying don’t look for anything to happen), but it sure would be nice if they could pull something off this October. Some signage, a little song a little dance on the fountain stage, some merchandise and maybe a special new beginning to Illuminations. That seems totally doable.

A bit of trivia: If Spaceship Earth was a golfball, Tiger Woods would have to stand 1.2 miles tall to be in correct proportion to it. A 200 yard drive would be the equivalent of teeing off in Tampa Bay and landing on the green at Daytona Beach

previousMorning Roundup – July 5th
nextDisney turns its back on futurism…