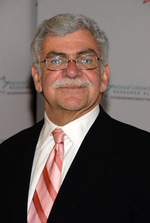 This is not the news I wanted to get at the end of an otherwise wonderful day. ABC Entertainment Editor and film critic Joel Siegel has died after a long battle with colon cancer. Siegel’s keen insight, turn of phrase, his smile, and on the sleeve humanity made him my number one point person for movie reviews pretty much my whole life. It didn’t hurt that our opinions of what makes a great movie were pretty much in sync.

He may have been a critic of film, but he was a beacon for life. I can’t believe he’s gone.