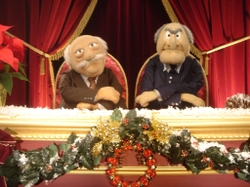 Winners of the ‘Webby Awards’ were announced this week. From the Disney camp, one of the two properties nominated won. ‘Statler & Waldorf: From the Balcony‘ from Movies.com won for the Best Comedy: Long Form or Series, Online Film & Video
for 2007 in the annual People’s Voice voting.

"The Webby Awards honors the outstanding work that is setting the standards for the Internet," said David-Michel Davies, executive director of The Webby Awards. “Statler & Waldorf: From the Balcony is a testament to the skill, ingenuity, and vision of its creators."