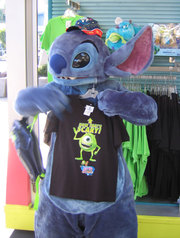 Back in November, my son and I were lucky to see the very first public preview of Magic Kingdom’s soon to be opened attraction, Monsters Inc, Laugh Floor Comedy Club. It was a pretty miserable show that needed lots of work, but truth be told I did see some potential if they got the kinks worked out. Others were not so kind, some going as far as predicting the attraction would never open, or if it opened it would then quickly shut down in failure.

Well we’re all going to get the chance to see which of our predictions come true. LaughingPlace.com reports that MILFCC is now scheduled to have its grand opening on April 2nd. If that’s the case soft openings should become more regular. As you can see on our model Stitch, they’ve had some merchandise out for the attraction since early January.

They must have made some serious progress on the show effects and, more importantly, the story. We’ll see. Reports from recent visitors who saw previews have been mixed at best. I know that some team members have been attempting to get transferred off the project, so if the boat sinks they don’t go down with it. I wish them luck.

previousMore Ways to Rent Disney Films From Blockbuster?
nextNo Anniversary Celebration for Epcot, but look who gets one…