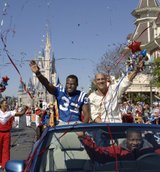 LaughingPlace.com was at the Magic Kingdom today to cover the appearances of Coach Dungy and Running Back Rhodes from the NFL Super Bowl Champion Indianapolis Colts. They played a little football with some kids then did press interviews. Later there was a parade down main street with all the victory trimmings.

I wish they would do these things on weekends so more locals could see them. (Photo (C) Disney)

previousCalifornia Adventure turns 6
nextHow is Disney doing these days? Not too shabby!