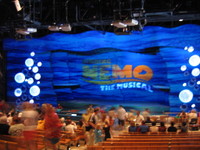 Disney’s Animal Kingdom is in their first week of previews for their newest musical stage show "Finding Nemo – The Musical". I was lucky enough to be in the audience for the very first two public showings of the stage show and I can’t wait to get back.

Disney is counting on this show to help extend Animal Kingdom’s audience retention. Many guests still leave after half a day at the park? Will it work? I think the answer to that will be, as Crush would say, a righteous yes dude!

In creating "Finding Nemo – The Musical" Disney stretched its creative team and brought in Tony Award-winning "Avenue Q" co-composer-creator Robert Lopez to write all new songs for the show; Michael Curry, whose puppets have been enchanting audiences for years on Broadway and in Disney themeparks; and Director Peter Brosius, who won a Tony as artistic director of The Children’s Theatre Company of Minneapolis. The result is a rich show where the Broadway DNA shines through even in the boxy themepark setting.

The "Theater In The Wild" previously housed a ‘Tarzan’ show that featured some extreme inline skating and acrobatic performers. The jungle feel is gone and the once open air venue is now totally enclosed. This provides climate control, which will be very appreciated in the summer months, and lighting control required for the sorts of effects used in this production.

They may have enclosed the building, but there is still no lobby, no restrooms accessible from the inside, and the seats are the wooden benches of a typical outdoors themepark theatre. Disney’s Indoor theatres usually have padded and armchair seating. The last few rows of benches don’t even have back rests. As far as I can tell the rake of the theatre and configuration of seats hasn’t changed from the Tarzan days. The lack of a lobby means guests will be queuing up outside in the sun. There is some shading from plants, but fans and misters would be nice additions before the tempratures begin to rise again.

The capacity of the building is 1700 guests. At five shows a day that’s just 8500 guests, or around a third of the park’s attendance on busy days. I’m hearing they’ll only be performing four shows a day for the most part too. There is currently no fastpass and no plans to add any as far as I know. Expect long lines to form early as the popularity of this show spreads and DVC members, locals, and cast members make this a favorite hangout.

The show closely follows the plot of the movie. However, cuts were required for it to clock in at the sub-35 minute running length that the theme park setting mandates. These story cuts come mostly from the last half of the movie, which makes the ending of the stage show seem a bit

rushed. Some of the emotional arcs of the characters are shortened or neutered completely to make the show fit within its time limit. But a show with those story lines added back in via song and set could easily extend this concept to full Broadway length. Something I very much hope we will see someday.

The characters from the movie are potrayed with puppets. Small hand held puppets for most characters, but larger contraptions for some of the bigger puppets. Unlike the other puppet shows at WDW (The Little Mermaid, Playhouse Disney) the puppeteers are right on stage with costumes that add to the feel of the scene, rather than blend into the background. 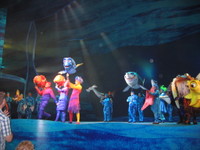 If you’ve seen The Lion King on Broadway you get a little feel for how this works with the Pumbaa and Timon characters. It takes a really talented performer to work the puppet while singing and acting (and sometimes do acrobatics) on your own. But the Finding Nemo cast really pulls it off.

Since the show is still in previews, I’m not going to do a full review here. I reserve that right for a few weeks down the road when all the tweaks have been made by the cast and crew. I’ll just say that the shows I saw had some third act problems. But that was minor compared to the overall success of the rest of the show.

I completely enjoyed the music for this show and have been listening to it daily via a recording I made with my iPod. Apparently there will be a show CD, but not from the original cast, rather from studio artists. That’s too bad as the performers in the show definitly have the chops to do the CD on their own. But I guess that would delay its release. (aside: I hope they’re planning other merchandise specific to the show too.)

All the musical performances contribute to the storyline and I love how the various musical styles are also used to help set the mood (Beach Boys-esque music for Crush and the subtle little ‘Jaws’ beat to intro the sharks music number).

The weakest number is ‘We Swim Together’, the big fish tank number. It’s just an ordinary musical number. But even that’s pretty good, and is reprised at the end of the show to tie-up Nemo’s development

The dialogue draws some key lines from the movie, but also has lots of original writing. There’s plenty of humor. Not just in the character of Dory (who gets most of the laughs), but also in Marlin’s jaded attitude. In fact, Marlin, with his sardonic wit, reminds me a lot of a character from Broadway’s RENT – Mark, the film maker.

The show also isn’t afraid to use humor that breaks out of the word set for the audience by the film. In the first ‘Big Blue World’ number Marlin explains to Nemo that ‘Sharks are not our friends. Haven’t you seen Jaws?’ Which got a big laugh both times. There’s also a funny penguin bit. Some of the timing needs to be worked out, but that will come with more time under the cast’s belt.

The future of the show

The show continues in Previews until January. That means you’re not guaranteed to see the show and there might be tweaks or technical difficulties. But after this Saturday the show is expected to run pretty much daily for four shows a day. There will also be a week of special AP previews the first show of every day from December 1st through 10th.

Once word gets out expect every show to be packed by Disney regulars (both locals and visitors who make frequent Disney World vacations). So I’d recommend arriving at least 30-45 minutes ahead of time to be seated. There really aren’t any bad seats in the house, but if you’re sitting too far back you will miss out on some of the nuances of the great performances by the puppeteers.

As I mentioned, I did make a couple recordings of the first shows. They’re up on a ‘podcast‘ right now if you’d like to listen along. If you subscribe to the podcast, I’ll likely be updating it with future recordings from the show and possibly other locations in the parks.

I also took a few pictures of the theatre and the curtain call of the second show. They played an announcenemt that asked guests not to video tape or photograph the performance. But I was certainly not the only one in the audience taking pictures during the curtain call. So I feel that’s pretty safe.

If you’re thinking of making a trip to Disney sometime soon this show is a must see. So get yourself down to Disney’s Animal Kingdom and see the best stage show to come from Disney since "The Hunchback of Notre Dame: Festival of Fools" at Disneyland. "Finding Nemo, The Musical" knocked my socks off and I’m looking forward to seeing much much more of it.

1 thought on “Finding Nemo – The Musical, now in previews”