As Cory says on BoingBoing.net, this guy is my new hero. Jamie has put his skills and talents as animator and artist to use recreating some of props and set pieces from Disneyland’s Haunted Mansion. 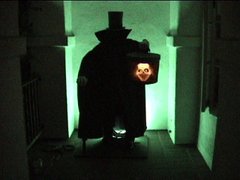 For those that don’t know (and for good reason-beacause they’re not geeks like me and have a life-whatever…) there was a character in the Disneyland Haunted Mansion when it first opended up called the Hatbpx Ghost. It was nearby wear the bride (with the beating heart) currently is now in the attic. For some reason, mostly because th effect didn’t totally work, they removed it from the attraction (not "the ride"-the "attraction"!). Well. it has created lots of talk by Haunted Mansion fans alike.

So I decided one day to make one!

You can see much much more at Jamie’s blog.

In Cory’s post he notes that Jamie has recreated the "Letmeoutahere" ‘open-coffin’ from the Haunted Mansion. A little bit of interesting trivia is that X Atencio, the lyricist for the Grim Grinning Ghosts song, does the voice for that scene.