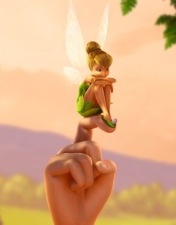 Like the Harry Potter book series, the DVD based Tinker Bell stories set in the world of Pixie Hollow start simple, easy to get into, and then progress into more and more complex stories and issues. DVD number 3, “Tinker Bell and the Great Fairy Rescue,” follows that tradition presenting a rich story with many more characters and emotions involved.

As the name implies this film features a rescue which implies some action and the directors aim to deliver. It also delivers some important moments in the mythos of the Peter Pan world. I don’t want to give away any spoilers, but in the clips I saw, I spent a lot of time going “oh, that’s cool.”

The third film really shows a progression in quality film making that has occurred since the Pixar brain trust arrived after merging with Disney. The art direction and character animation continue to improve. They’ve moved the characters away from the cartoony feel. The set design is fully realized with lots of rich detail.

Earlier today, I was priviledged to participate in a roundtable Q&A session with Helen Kalafatic and Bradley Raymond, Producer and Director respectively, follow below the jump for the transcript.

Tinker Bell And The Lost Treasure Soars into New Adventure

In her second direct-to-DVD animated movie, Tinker Bell, the world’s most famous pixie, sets off on an adventure that takes her away from Pixie Hollow, and toward a new friendship. Along the way she makes mistakes, learns some lessons, and, in the end, saves the… Read More »Tinker Bell And The Lost Treasure Soars into New Adventure