Tinker Bell And The Lost Treasure Soars into New Adventure 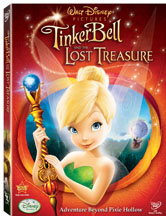 In her second direct-to-DVD animated movie, Tinker Bell, the world’s most famous pixie, sets off on an adventure that takes her away from Pixie Hollow, and toward a new friendship. Along the way she makes mistakes, learns some lessons, and, in the end, saves the day in her own unique way. All-in-all Tinker Bell And The Lost Treasure is a worthy successor to the first movie.

If you watched the first movie for the secondary pixies, you’re going to be a big disappointed by Lost Treasure. The DVD producers appear to have made a choice to make this second film more boy friendly, and so Fawn, Iridessa and their friends are left with only minor roles. It actually seems like they have bigger roles in the DVD extras than they do in the movie

In Tinker Bell and the Lost Treasure the adventure takes place in Autumn, as the fairies are on the mainland changing the colors of the leaves, tending to pumpkin patches, and helping geese fly south for the winter. The rare Blue Moon will rise, and when its light passes through the magical Fall Scepter that Tinker Bell has been summoned to create, Pixie Hollow’s supply of pixie dust will be restored. But when Tinker Bell accidentally puts all of Pixie Hollow in jeopardy, she must venture out across the sea on a secret quest to set things right.

Along her journey Tink meets new friends, including Blaze, a cute and courageous firefly that helps Tinker Bell complete her mission. It’s a long and dangerous journey, full of astonishing encounters, a few narrow escapes and a daring rescue by Tink’s friend Terence.

My biggest problem with the movie was that the adventure took so long to get going. Then once it started, there was enough momentum to keep it going, but the audience is asked to make a log of jumps in story along they way. That was the same problem I had with the first movie, so if you liked the first one, you’ll probably enjoy this one the same.

I was impressed with the quality of the animation in this film. Although it is CG Animation, the style worked well with the story, and the enhanced natural presentation that is Pixie Hollow.  It was wonderful to have all the big name voice actors back representing their characters. There will be three more of these films and I’m sure they’ll all make Disney a ton of money, not just in the DVDs, but in the product division, which basically ordered the DVDs to help with merchandise sales. If that’s the goal, then it is working.

Both the Blu-ray and DVD have magical bonus features including animated “scenes you never saw,” a guide to Pixie Hollow, and much more, offering viewers an extraordinary trip deep inside the enchanted world of Pixie Hollow. This is one of those special features where the animators put in extra work to make the audience laugh, and while most are very funny, it would have been better to see that humor in the film.

Tinker Bell and the Lost Treasure is directed by Klay Hall and produced by Sean Lurie. It will be available in stores on October 27th, but you can pre-order it now online.