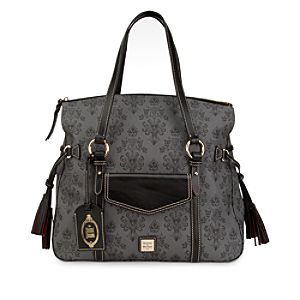 After a long customer service nightmare, Disney fan Oni Hartstein has finally prevailed in getting someone to take responsibility for the shoddily-made Dooney and Bourke Haunted Mansion bag she owned. Initially a 10th Wedding Anniversary gift, as many Disney fans know, even acquiring the Haunted… Read More »Victory: Disney exchanging poorly made Haunted Mansion Dooney and Bourke Bags

I’ve been thinking a bit more about what was disturbing about Marty’s open-letter to Disney fans. I can overlook the fact that it was all corporate spin, and a blatant attempt to get Disney Fans to hush up. It’s maddening that they would treat their fans that way, but understandable. The fact is the letter didn’t address any of the concerns being raised about the change. It was essentially a take it or leave it situation.

And as Ken reminds us in his comment, that is certainly an option. The reality is the Walt Disney Company is just another company producing what is just another entertainment option in a world that is full of options. But for those of us who love the Disney product the reality is it isn’t just another company. It’s a legacy and it is important from time to time to remind the Disney company that they’re being trusted with that legacy. It happened when they wanted to rip out Mr. Lincoln and it happened when Eisner strayed too far from the legacy.

There are plenty of signs that the current management gets this. I want to have faith that we can trust Bob Iger and Uncle John. But the proof is in the pudding. So let’s see what Marty was baking up in his letter.

If we read between the lines, I think what Marty’s letter was trying to tell us is that 8 years ago the powers that be had IASW in the cross-hairs and that Imagineering jumped into action with a plan to save it. This plan is what they came up with so fans should be happy that we’re not currently hearing another story about them ripping out IASW in its entirety.

I realize that this is the new reality of The Disney Company. It’s all about metrics. Are the labor hours justified by the attraction throughput? That simple equation has driven more change at Disneyland than any other reason since Frank Wells died. They no longer look at the park in its entirety as a theme park experience. They see it as a series of small parts, each of which must stand on its own or suffer the consequences. (This was literally the case under Eisner where every Churro cart and Hot Dog stand had to make 20% or be torn out.)

When cost per guest is the equation the only choice Imagineering feels left with is to “make it relevant” to todays audience. On the surface, that’s a good plan. Making a change that taps into current trends is a proven method of bringing in the crowds. Hence we get Tarzan’s Treehouse, Pirates on Tom Sawyer Island, Captain Jack in POTC, Winnie the Pooh in place of Country Bears, etc. But when those changes are based on modern day trends you run into a problem where you have to continually update the attraction every few years to stay current. The crowds get hooked on “what’s new” and quickly die out when the new becomes old.

It’s much more difficult to build an attraction that will stand the test of time. Disney Imagineers, led by Tony Baxter of all people, knew this when they replaced the Nature’s Wonderland area with Big Thunder Mountain. He knew it when they made over Fantasyland. There was no attempt to make the attractions more relevant for modern audiences by introducing modern characters or trendy themes. Just an attempt to plus the show, replace what you could with modern technologies, rip out what would no longer work (MMC revue), and put in something new that would stand the test of time.

That is the type of change Walt Disney was talking about. Being a “change agent” means making real change based on quality, show, and story. Walt was not concerned with making it relevant. He was concerned with providing the best show he could that would stand the test of time and provide the same quality experience to every guests. If it wasn’t working, he wasn’t afraid of change, but relevancy to modern audiences was a result of doing the best job they possibly could. Quality will win out in the end.

IASW has 40+ years of time tested operation with a great show, classic story, and a unique quality, owing in large part to Mary Blair’s designs, which is part of what made it such a classic. It may be that 40 years is the end of the road for the original story of a child’s prayer for world peace and unity (although I would argue we need it just as much now as we did in 1964). But I don’t think the answer is to make it relevant. Otherwise you have to commit to update it every few years when the next generation comes along. And then what happens to the other generations (tweens don’t drive themselves to the park after all). Are they forgotten? Soon enough even the younger audience will tire of changes. The queue will swell initially, but the audience will tire of the new and the queue will shrink again. Look at Pooh for exhibit #1 and POTC for exhibit #2, both are now walk-ons once the mid-day lines die down.

The thing about adding scenes or Disney characters to IASW is that it’s a half effort. It’s not going to add another 40 years of life to the attraction. Stitch, Woody, Pocahontas, they’ll all be replaced by new Disney branded characters. Stitch isn’t even a child. In five years are they planning to put in High School Musical or Hannah Montana dolls?

Sure, you can make the Aladdin & Jasmine dolls look like Mary Blair and Alice Davis did them themselves, or close enough. Sure you can add in an America scene that doesn’t stick out like a sore thumb. But neither does anything to add to the story.

(Btw, adding any ‘America’ scene, whether it’s ‘Up with America’ or not, is insulting the very guests who ride. The USA is the host, we don’t need to be in the attraction with our invited guests. When you get to the finale, the USA is there celebrating world unity. That’s enough, anything more is being a rude host. That the people making this change can’t see that basic truth about “it’s a small world”, says a lot about why this change is so wrong.)

Most of all, I’m disappointed that this is the best Imagineering could come up with when faced with a decision to save IASW from the wrecker’s ball of new accounting. There is no vision in this change, just an air of desperation. No respect for the original story or vision of the attraction, just a quick overlay that has nothing to do with the theme of world peace and unity at all. Take it back to the drawing board and show me what Walt Disney’s Imagineers can really do to update a message of world peace and unity from the children of the world.