Ponyo: Animation Artistry at its peak 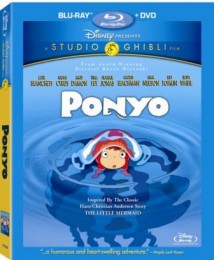 Ponyo is a Studio Ghibli Film from Oscar®-winning director Hayao Miyazaki with dubbing and distribution in the US by Walt Disney Studios. It is becoming increasingly clear that there is one true master when it comes to the art of animation. That person is Hayao Miyazaki. It was Miyazaki’s biggest box office hit with over $200 million world wide and over $15 million here in the US, his best showing in the states so far. His films deserve every bit of attention they get and more. A big thanks to the team at Disney for helping to bring it stateside.

The movie is very loosely based on Hans Christian Andersen’s “The Little Mermaid” and it’s interesting to watch just to see where Miyazaki takes the movie. There is obviously a lot of Japanese mythos that I missed while watching the film, but upon subsequent viewings the richness and depth of the story really grew on me, even if I didn’t know exactly what the reference was.

Of all Miyazaki’s films, Ponyo is the most accessible for kids. My six year old was totally entranced for the whole film, a rarity for him. But there was plenty for adults to absorb as well. The movie works on multiple levels, to say the least.

One of Ponyo’s themes is a very contemporary concern for nature. You’ll be blown away by some of the animation and moved deep in your soul by others. In particular one seen with waves taking the form of fish is literally the most beautiful animation I have seen in my life.

More details about the DVD and its special features below the jump:

Around the Hub – Disney News and Links

Out in Los Angeles the ABC station is in danger of losing their broadcast towers to the wildfires out there. Smoke is a persistent smell across the county. So everybody out west please be safe and take care of yourselves, okay. Wall-E Tattoo. Very cool,… Read More »Around the Hub – Disney News and Links

Around the Hub – Wednesday Words

Here are a few links from around the web that I’ve been meaning to write longer stories about, but just ran out of time. Walt Disney’s original movie muse Virginia Davis passed away this week at age 90. The Alice series featured Davis interacting with… Read More »Around the Hub – Wednesday Words

Miyazaki’s PONYO gets August Release Date In US

Animation master Hayao Miyazaki’s latest film, PONYO, has been picked up by Disney for a stateside distribution. August 14th will bring the movie that was inspired by Hans Christian Andersen’s fairy tale The Little Mermaid to America. It is already a hit in Japan. With… Read More »Miyazaki’s PONYO gets August Release Date In US