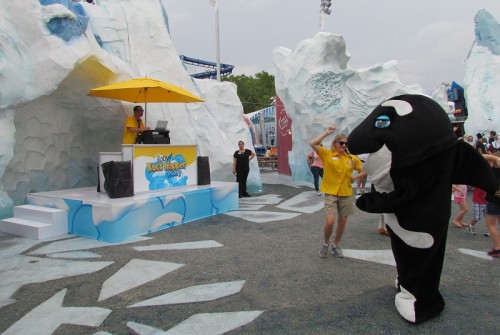 Spring is a busy season at Orlando’s theme parks. Crowds can be large and lines long no matter where or when you go. SeaWorld Orlando wants to give you another option. Every Saturday through April 12th, you can bring your family and enjoy the special Just for Kids festival. Like all SeaWorld events, it’s included with your park admission.

This year’s Just for Kids is a little different than year’s past. They’re not having the kid music concerts. But SeaWorld’s year-long 50th Celebration will be in full swing. As part of the celebration, park pathways will come to life with oceans of spontaneous entertainment. Guests will enjoy a Sea of Surprises featuring new interactive experiences and shows, even more up-close animal encounters and the SeaWorld “Surprise Squad” treating park guests with prizes and special experiences every day.

At “Just for Kids”, families can experience whimsical fun and make lasting memories as they dance along to jammin’ DJ’s at the NEW Rockin’ Rockhopper Party in Antarctica: Empire of the Penguin, get up close with adorable animal friends at the all-new “SEA Garden,” and meet some of their children’s favorite television stars. My favorite part was the “SEA Garden” which also features some amazing sculptures made from debris that was found on beaches.

And there’s more! Kids can go on an educational treasure hunt as they look for the Sea Star icons throughout the park where they’ll discover fun, educational activities. At each location they will collect a stamp and a limited edition Explorer’s card. After visiting all four locations, they’ll receive a coupon to redeem for a special SeaWorld prize at select gift shops.

Then end the night with Shamu & Crew at the Shamu Dance Party at the Village Square located at the front of the park. The party begins one hour prior to park closing with a stilt walker emcee who fills the square with music that the whole family can dance to, including popular line dancing songs and party favorites. The Shamu Dance Party continues until 30 minutes after park closing.
Read More »SeaWorld Orlando Just For Kids Rules Saturdays 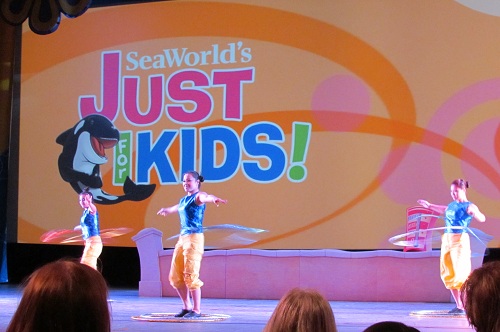 For me, the highlight of the day were the hula-hoop artists from China.

Went to SeaWorld Orlando on Saturday to sample their new “Just For Kids” festival. While there we checked in on the construction for TurtleTrek, schedule to open later this year, and Antarctica, targeted for Spring 2013. The park was very busy, but not too crowded and we definitely had a good time.

SeaWorld has a number of events through-out the year, but none focused on the youngest park visitors. Just For Kids gives families with pre-school and elementary aged children some activities and shows that are just for them. With the addition of Legoland to central Florida, this audience has become the latest battle ground. 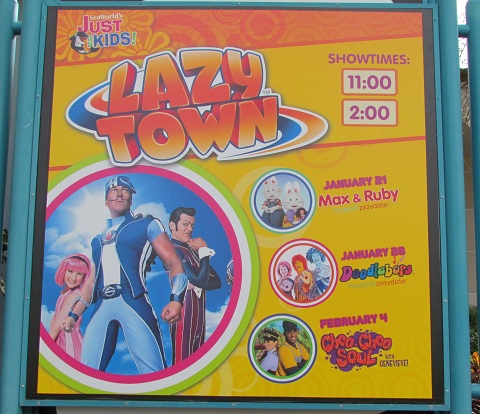 There are some good savings for families with kids too. For the next three Saturdays, parents can rent strollers at half-price, and the following items are free for kids with each paid adult: all-day dining deal, sky tower ride, and free Penguins Up-close, Dolphins Up-close, or Behind-the-Scenes tours. The all-day dining deal is a great value if you’re planning on eating twice while in the park.

My biggest criticisms with the event were a) it was hard to get information about the event and b) the big stage show wasn’t as good as it could be. The shows are advertised using the original cast members from the TV show, but the actors were all different, with different voices. The kids around me picked up on that pretty quickly, but for the youngest kids, it didn’t appear to matter. I understand why the cast was different, and the actors did give it their all, but something was lacking. Part of the problem was also the poor puppet design and the fact that it was basically a 4-person cast. Lazy Town should be populated with many more of the citizens from the show.

That’s on the ticky-tack side of complaints. Who knows, the next three sets of shows could be a lot better. Plus the opening act featured a small troop of acrobats from China. The women hula-hoop performers were particularly talented. I would rather have seen a half-hour show of them then Lazy Town.

Festivals like “Just For Kids” are at least partially targeted at getting locals into the park. Flyers advertising SeaWorld’s Summer Camp opportunities were seen all over the place.

Join me below the jump for more photos of Just for Kids and construction around the park: 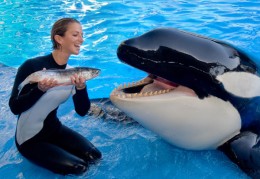 SeaWorld Orlando and Busch Gardens sit at opposite ends of the I-4 corridor and count on the tourist traffic that Central Florida delivers. When a newcomer targets what SeaWorld perceives as their target market, it makes sense that they’d counter with something. That newcomer is Legoland Florida and they’re going directly after families with young kids, the core of SeaWorld and Busch Gardens.

Both SeaWorld and Busch Gardens are now offering a Preschool Pass good for free admission for all of 2012 for kids 5 and under. You have to sign up online, but it’s a great deal. Especially when combined with an AP or Fun Card for locals. SeaWorld Orlando is also adding an all-new festival that’s “Just for Kids” with concerts by some kids shows that will be very familiar to the pre-school set.

Update: Great minds think alike, the Orlando Sentinel has a story with more details on the theme park’s fight for kids.