Walt Disney Picture’s modus operandi of late is to try and schedule one tent-pole movie every summer. One film ‘guaranteed’ to rake in close to a billion dollars (if not more) at the box office that will make up for some of the weaker performances in the studios limited slate of releases. Admittedly they’d have mixed results with this strategy (Prince of Persia anyone), but results have always been great when you put Johnny Depp and Gore Verbinski together. And that’s why Disney is now moving post-haste to get The Lone Ranger ready for it’s 2013 Memorial Day weekend date with the box office.

As you read through the press release below, you can’t help but think this group of all-stars will hit it out of the park… right?

Pirates of the Caribbean: On Stranger Tides Blu-Ray/DVD Review

The Pirates of the Caribbean attraction at Disneyland has spawned one of the most successful movie franchises of all time. That’s quite a tribute to Walt Disney and the Imagineer team that created the ride. So, how does the fourth movie in the the set measure up? Pretty well, I thought.

A new Director, Rob Marshall, set much of the cast from the first three films on the sidelines and instead focused on Johnny Depp’s character of Captain Jack Sparrow by taking him out of his element for much of the film. That creates much of the films tension while the other characters went around in their sub-plots without many surprises. That’s not to say the performances were bad, they were great, or the writing was stiff, it moved the pace along quite nicely. But it was a different film than the first three. Which, for many, was a good thing.

The best Blu-Ray extra was the commentary from director Rob Marshall and executive producer John DeLuca. I also liked the deleted scenes. If you’re lucky enough to own a 3D TV, then you’ll want to make sure to pick up the Limited Edition version with the 3D.

Pirates of the Caribbean: On Stranger Tides hits DVD shelves on Oct 18th 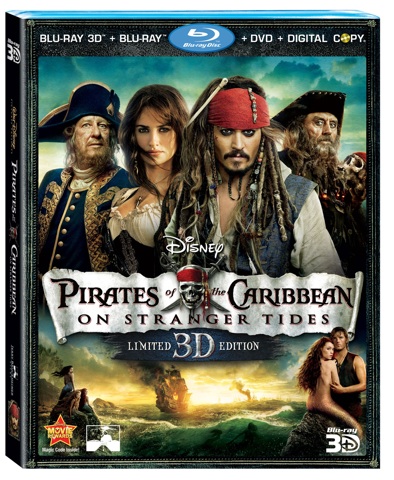 The fourth film in the Pirates Of The Caribbean saga may have been missing a few key elements of the original films, but it did the legacy of the attraction it was based on proud. In Pirates 4, we dive deeper into the epic quest to find the fountain of youth. Of course, Johnny Depp returned as Captain Jack Sparrow and helped score over $1 billion in Box Office loot. Now, it can be yours on Blu-ray or DVD, including a special 3D version and digital download starting October 18th.

The full announcement is below the jump:

When you have Johnny Depp, aka the billion dollar box office guarantee, atop the marquee, you’d think $50 million isn’t that much to haggle over. Regardless, Disney studios has halted production on “The Lone Ranger” in an effort to shave said sum off the reported… Read More »Disney halts production of Depp Vehicle “The Lone Ranger”

Pirates Of The Caribbean 4: On Stranger Tides Rules Box Office

With most of the cast from the first three Pirates Of The Caribbean films left on the shore for the fourth movie it goes without saying that Johnny Depp will have to bring his very best Captain Jack Sparrow to the game in order for… Read More »Clip from Pirates 4: On Stranger Tides features Captain Jack in Action

Annie Leibovitz and Disney Parks are back again with more photos from the Dream Portrait series. This time the subject matter is Pirates of The Caribbean: On Stranger Tides, the fourth movie in the series. As part of a special layout appearing in May issues… Read More »Annie Leibovitz captures Johnny Depp as Captain Jack Sparrow

The closer we get to May 20th the louder the drum beat gets for the return of Captain Jack Sparrow and the rest of the Pirates of the Caribbean crew, minus a few key cast members. This time they’re hunting the elusive Fountain of Youth… Read More »Pirates of Caribbean: On Stranger Tides – New Trailer & Banners