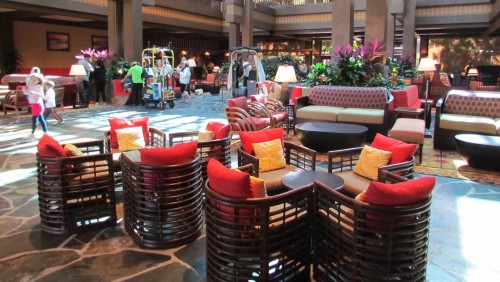 But that doesn’t mean they needed to go as generic as they did with the new water feature. It’s pretty basic. In fact, the whole thing feels slightly generic. The stores give some excitement around the edges, but the central part of the lobby feels very similar to every other large hotel on the planet.Read More »Polynesian Village Resort Lobby Emerges After Long Refurbishment

Yesterday we got a sneak peek at Disney’s new Hawaii resort Aulani via a couple hundred snapshots. Today here’s a video tour of the lobby and grounds of the Ko Olina property. This was taken about on the 12th, about 15 days before the grand opening.

Via the always excellent DisneyByMark.com.

Bonus video of the kids water play area is below the jump: