John Lasseter on The Princess and The Frog 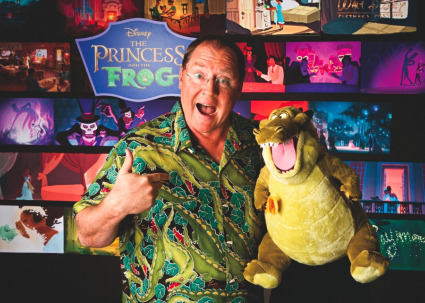 John Lasseter is the busiest guy at Disney. He’s the co-founder of Pixar, the history-making computer animation studio, chief creative officer of Walt Disney and Pixar Animation Studios; and the principal creative advisor to Walt Disney Imagineering, and in demand at film festivals and charity events. Always at the forefront of what can be accomplished within animation, Lasseter is excited for Walt Disney Animation Studio’s upcoming release, The Princess and The Frog, which marks the return of the musical fairytale with a Princess at the center. In this interview we cover everything from the movie to his love of Hawaiian print shirts (a man after my own heart).

Q: John, how did The Princess and The Frog come about?

Ed Catmull and I, the day I returned to the Walt Disney Animation Studios, said that we wanted to bring back John Musker and Ron Clements. So, once we brought them back, I empowered them to come up with their own project. I mentioned to them one idea that I had, just a nugget of an idea at Pixar. I love the story of “The Frog Prince,” and I love New Orleans. And I thought that it would be a great place to set a story like that…and that’s all I mentioned to them. We always ask for the directors to come back to us with not just one idea, but three ideas…and they came back with nine ideas. These guys were so prolific, they’re fantastic. And one of them was The Princess and The Frog—they had this wonderful twist on the story, where the main character, Tiana, kisses the frog, but she’s not a real princess, she gets turned into a frog as well. That was their clever twist on it. They wanted it to be a musical, set in New Orleans, and they wanted Randy Newman to write the music which, of course, I loved, because I’ve worked with Randy Newman on all of the movies that I’ve directed. Randy grew up in both New Orleans and Los Angeles. He would go every summer to New Orleans, so he knows the city and its music. It’s like he was born with it. It’s in his DNA, and so I think he was a phenomenal choice for it.

Q: Why the return to fairy tale animation now?

I’ve always loved animation it’s the reason why I do what I do for a living – the films of Walt Disney. This art form is so spectacular and beautiful. And I never quite understood the feeling amongst animation studios that audiences today only wanted to see computer animation. It’s never about the medium that a film is made in, it’s about the story. It’s about how good the movie is. And so one of the first things that I did when I came back to the Walt Disney Animation Studios was to ask John Musker and Ron Clements to come back to the studio and just empowered them to say, “Come up with a movie that you really want to tell.” And The Princess and The Frog was born. In glorious Disney fairy tale animation. It’s just spectacular.

Q: How is The Princess and The Frog a continuation of this incredibly rich legacy that is Disney Animation?

You know, what’s exciting about The Princess and The Frog, is that it’s the return to the sincere fairy tale. It’s a return to the musical, which hasn’t been done in quite a while. You know, it’s so classically Disney in every way, yet it’s brand new, it’s something you’ve never seen before. And that’s what’s so exciting about this. When you sit and watch The Princess and The Frog, I mean, I helped make the movie, but I sit there and I watch it and I think, “I forgot how much I love this!” It’s all those things combined, the animation, the sincere fairy tale, the musical, the great characters, the talking animals, the princess, the prince, all these things combined, it’s so classically Disney yet it’s so completely original.

Q: Tell me a little bit more about the story of The Princess and The Frog

The story of The Princess and The Frog is about a fantastic character named Tiana. She is such a strong character. She’s a waitress, but she wants to own her own restaurant. It was her father’s dream that she’s carried on, and she works double, triple shifts to raise money to buy this old sugar mill that she thought would make a great great restaurant right in New Orleans. And on the verge of getting her restaurant, someone buys it out from under her and her entire dream is just pulled out from under her.

So at this moment, she does what she said she would never do, she wishes on the evening star, which is what her best friend Charlotte always does, because Charlotte only wants to marry a prince—Tiana is more practical—but she finally does wish upon an evening star. And then, she looks down and sees a frog and thinks, “Oh great, a practical joker,” you know. And she’s at a masquerade ball and she’s dressed as a princess. She looks down and she says, “I take it you want a kiss now,” and the frog answers, [IN A FRENCH ACCENT] “Kissing would be nice, yes?”

And it freaks her out because this frog is talking, and she finds out this is a frog that claims he’s actually a prince. So he cons her into kissing her. But instead of the frog turning into a prince, she actually turns into a frog, because she’s not a real princess, it was a costume party. So now here’s a prince, and here’s Tiana as a frog, and they have to travel the Bayou to turn this spell around, they have to find this voodoo fairy godmother named Mama Odie to reverse the spell that Dr. Facilier, the evil voodoo practitioner, has put on the prince, and now, Tiana.

Along the way they meet this fantastic alligator named Louis, who’s a jazz trumpet-playing alligator, and he’s hilarious, he’s fantastic. And they also meet a firefly, a Cajun firefly named Ray. And these two become close friends with Tiana and Prince Naveen. And it turns into this fantastic journey for them to become human again. And along the way, they might fall in love. I don’t want to give away the ending. And I’m not gonna say anymore than that.

Q: Could you talk about the filmmakers?

It was really exciting to get John Musker and Ron Clements to come back to the Studio. I went to College with John Musker, so we’ve known each other for a long, long time. I think they are Disney. When you think about the movies they made, especially THE LITTLE MERMAID and ALADDIN, I mean, those are two of the great Disney animated films. And I think that it was so exciting to get them to come back to the Disney Studios.

In the end, when they came back, we just wanted them back at the Studio, because they belong at the Disney Studios. So when they came back, I said, I want you to do a movie that you really want to do, something from your heart. And so we had talked about a bunch of ideas and there was just a nugget of an idea that I have had up at Pixar, which is to do a retelling of “The Frog Prince” set in New Orleans, and that’s all I had.

And so I just mentioned that to them and they took it and created the most original and fresh twist to the story, and they came up with The Princess and The Frog. And they wanted it set in New Orleans and they wanted it to be a Musical. So it was so exciting. I think John Musker and Ron Clements are just phenomenal in their leadership, their storytelling, their creativity, their knowledge of animation, their knowledge of filmmaking, it’s just fantastic.

Read More »John Lasseter on The Princess and The Frog 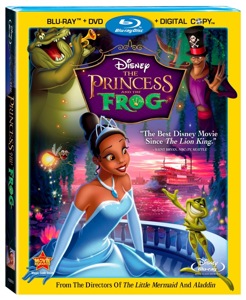 The Princess and the Frog reels in $25 million

Disney’s latest animated feature film “The Princess and The Frog” took in an estimated $25 million at the box office this weekend. A healthy number for Disney’s return to hand drawn animation, but not blockbuster numbers either. Pixar’s “The Incredibles” and “Finding Nemo” each opened… Read More »The Princess and the Frog reels in $25 million

Is The Princess and the Frog Disney’s next Franchise?

Walt Disney Company CEO Bob Iger takes the 1980s idea of synergy that was perfected by the early Eisner and Wells administration to the next level with his concept of the Franchise. I’m not talking Kevin Garnett for you NBA fans. Nor is it like… Read More »Is The Princess and the Frog Disney’s next Franchise?

One last little bit to share from the media event for Tiana’s Showboat Jubilee at the Magic Kingdom. I got the chance to meet and interview Tara Anderson, Show Director from Creative Entertainment at Walt Disney World Resort. Her previous work at the Magic Kingdom… Read More »Interview with Tiana’s Showboat Jubilee Show Director

If you’re heading out to Disneyland or Walt Disney World this fall, make sure you mosey on down to the Rivers of America and catch “Tiana’s Showboat Jubilee.” Princess Tiana, Prince Naveen, Louis, and the evil Dr. Facilier are all featured with their own songs… Read More »Tiana’s Showboat Jubilee Video Clips