A new images was released from Disney Animation’s next feature film. In it, 8-bit Ralph, is inside a game called Hero’s Duty, instead of his own game – “Wreck-It Ralph”. On a quest to prove he’s got what it takes to be a hero, 8-bit… Read More »Wreck-It Ralph New Image, Early Feedback

A new image from the upcoming Disney Pixar film “Brave” was released today. In it, you see Princess Merida sitting on the throne with her family looking unhappy. According to co-director Mark Andrews, “She isn’t your typical princess. She doesn’t wear nice clothes except in… Read More »New Image from Brave Today, Full Length Trailer Tomorrow 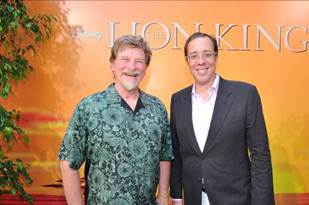 Disney to Extend The Lion King 3D Stay in Theaters

The 3-D reissue of the 1994 Disney animated feature “The Lion King” won 1st place at the box office for a second week in a row. The estimated $22.6 beat out Brad Pitt’s Moneyball and Morgan Freeman in Dolphin’s Tale. That makes the total take… Read More »Disney to Extend The Lion King 3D Stay in Theaters

Zooey Deschanel sings “So Long” from Winnie The Pooh

Actress and recording artist Zooey Deschanel gives us a little preview of ‘So Long’, a song she sings in Disney’s next animated feature, “Winnie The Pooh.”

Below the jump you’ll find a short, but cute, clip from the movie:

Earlier today I posted details of the Winnie The Pooh animated feature scheduled for 2011. Now the first trailer has been released. What do you think?