Buena Vista Street in DCA – Inside the details 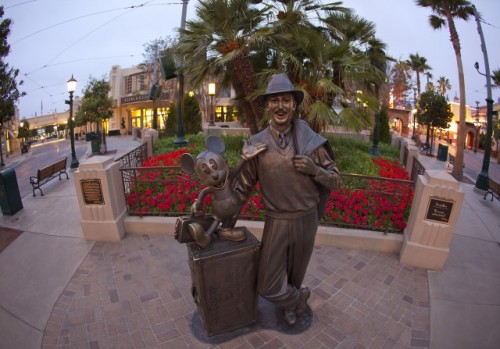 “It was July 1923 … With that wonderful audacity of youth, I went to Hollywood, arriving there with just $40. It was a big day, the day I got on that Santa Fe California Limited. I was just free and happy.” That was Walt Disney looking back on the day he arrived in California, with a cardboard suitcase and an address for his older brother.

While Disneyland represents a detailed collection of times and places that existing as much in fantasy as they did in real life, Disney California Adventure’s recent makeover added that same level detail to a park much in need of some sparkle and shine. The crowning achievement of that makeover was Buena Vista Street. Not only the new opening scene for DCA, but it also tells the story of Walt Disney himself when he arrived in Los Angeles with only a few dollars to his name and dreams of opening a cartoon studio.

Disneyland has released a series of portraits for each land inside its two gates. Up first is Buena Vista Street. Join us below the jump and learn the inside details:

Read More »Buena Vista Street in DCA – Inside the details

The Art Deco Stylings of Buena Vista Street at DCA

I’m a big fan of the Art Deco style of architecture, which means I know I’ll love Buena Vista at Disney California Adventure when I finally get a chance to visit. In the meantime, I’ve seen plenty of photos, but not really many pictures of… Read More »The Art Deco Stylings of Buena Vista Street at DCA

Behind the Scenes of the Red Car Trolleys at DCA

Like a scene out of Who Framed Roger Rabbit, the Red Car Trolley’s roll through the new Buena Vista Street area of Disney California Adventure. The Red Cars are crucial to the feel of the area that takes you back in time to Los Angeles… Read More »Behind the Scenes of the Red Car Trolleys at DCA

The new entrance to Disney California Adventure is meant to evoke that period of Los Angeles history as it might have been experienced by Roy & Walt Disney as they arrived and lived in Hollywood during the 1920s and 30s. The Red Car Trolley is… Read More »Red Cars bring Life, History to Buena Vista Street at DCA 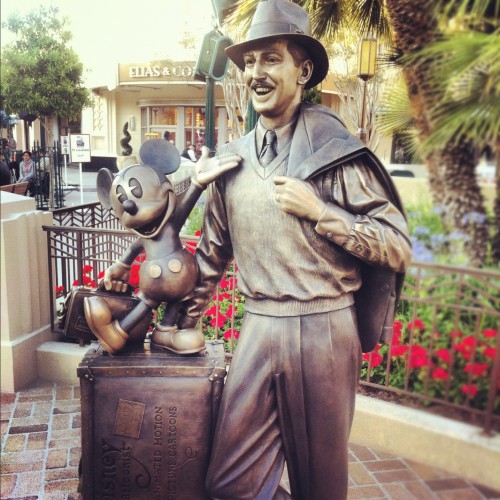 As readers of this blog surely know, when Disney California Adventure Park opened almost 12 years ago as a second gate to Disneyland it wasn’t the hit that Disney or its fans hoped it would be. In fact, it was written off by many as a ridiculous concept done on the cheap. For the record, I’ve always enjoyed the park, but I understand what people were saying, it needed more everything: rides, shows, food, theming, and above all else, it needed more magic. It needed more Disney. 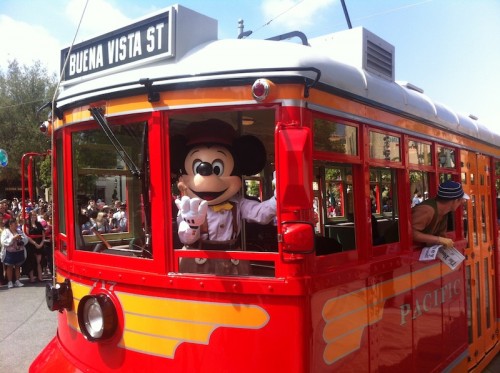 It does my heart good to see some of the details Imagineers are busy adding to Buena Vista Street at Disney California Adventure. Part of the re-made entry way to the park, this busy California street will take you back to 1923, when Walt Disney… Read More »Buena Vista Street – They’re Doing It Right at DCA

Hang on Disneyland fans, the much anticipated grand opening of Cars Land, Buena Vista Street and the Carthay Circle Theatre at Disney California Adventure has been announced for June 15th with the park being closed on the 14th “to prepare” (aka to hold a media event). The new additions will serve as a capstone in the five year plan to revive the Disneyland resort and recover from some of the bad choices made when DCA originally opened. It’s still less than a perfect park, but these changes should go along way to closing the distance. I mean just look at that mountain range in Cars Land.

The great folks at Disney have shared this video with some behind the scenes glimpses of final details being added to DCA.

I know I’m ready, how about you? Okay then… more details below the jump: