Walt Disney World is building a new walkway and bridge that will finally allow guests to walk back to the Grand Floridian, Polynesian, and even the Ticket and Transportation Center (TTC) if they so desire. On our visit to the Magic Kingdom yesterday we stopped by to see how much progress has been made.

When finished, the bridge will pivot and swing out of the way allowing Disney to move boats from the backstage area into the Seven Seas Lagoon and across to Bay Lake where the main dry dock and maintenance facilities are.

There’s a long way to go on this project, but it is interesting to see how much of the bridge itself has already been assembled. Looks like there will be some heavy lifting involved to install it onto the pivot point and across the canal.

While the bridge is being assembled, so far, Disney has not started laying the pathway that would connect to the Grand Floridian, nor the other smaller bridge that will need to cross another small water channel. 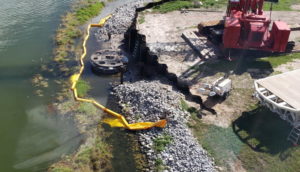 The pivot point for the bridge

It is, however, doing a lot of work around the entrance plaza for the Magic Kingdom that will eventually connect up with the walkway to the Grand Floridian.

As far as we know, there are no plans to allow pedestrian access from The Contemporary side to the TTC. That would require a much bigger bridge.

When the new bridge and walkway open you’ll have another option to return to your car at the end of your visit to the Magic Kingdom. Which do you prefer right now, Monorail? Ferry Boat, or Bus?