We’re back at the Magic Kingdom this week to check in on the progress of a new TRON-themed roller coaster coming to Tomorrowland. The coaster will be a close copy of the TRON Lightcycle Power Run coaster at Shanghai Disneyland.

As usual we jumped on the people mover for a view of the construction, but this time we also visited the queue of The Barnstormer featuring the Great Goofini in Storybook Circus.

Since we last checked in, you can see more of the show building structure now surrounds the track. The queue will wrap around the side of this building with the loading zone in the far back of the photo. While the winding track you see in the video now will all fit inside the main show building, another structure will stretch back out toward the Tomorrowland Speedway cars. Workers are laying the footings for that structure now.

The queue for the TRON coaster will load on via a bridge that goes over the Walt Disney World railroad tracks and those footings and structure has to be mostly finished before Disney can relay the train tracks and reopen the railroad. Something its fans are hoping won’t take too much longer. And another angle from the People Mover. 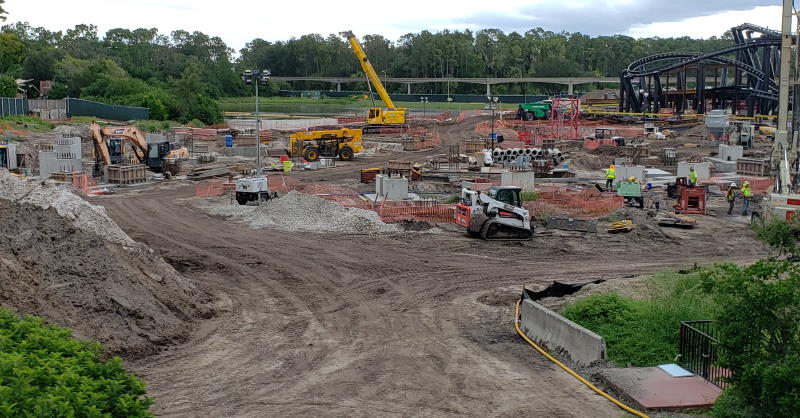 One thing to note is how huge this show building will be. Yes, it’s on the other side of the Walt Disney World railroad tracks, but the building will be visible from Fantasyland. It’s also visible from a lot of Tomorrowland. One more angle of the construction.

The TRON Coaster is expected to open in time for Walt Disney World’s 50th Anniversary. We expect to learn more about what Walt Disney World is planning for that major milestone this weekend.