Disney announces changes to Mickey’s Boo To You Halloween Parade 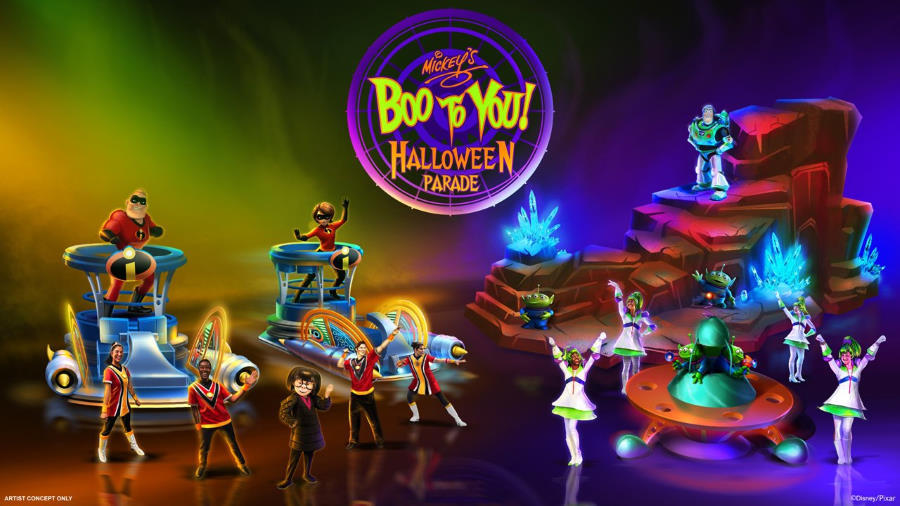 More Pixar’s characters are joining the Mickey’s Boo To You Halloween Parade in this year’s Mickey’s Not-So-Scary Halloween Party with additions to the fan favorite parade. With big hit movies from both Toy Story and The Incredibles franchises in the last year, this section of the parade is sure to be a crowd pleaser.

Boo To You marches through the Magic Kingdom twice a night with floats representing each land of the park with a fiendishly fun Halloween twist, of course.

Mickey and Minnie Mouse will have all new Halloween costumes representing a trick-or-treat along Main Street, U.S.A.. Liberty Square will still be represented by a Haunted Mansion unit with Hitchhiking Ghosts, grave diggers, and a new addition of the Spectral Bride, who glides along the waltzing spirits.

At top you can see the new Tomorrowland unit featuring The Incredibles and designer to super heroes Edna mode. Buzz Lightyear and the little green Aliens, meanwhile, are exploring crystalline treasures on the surface of a planetary playset float.

Our recommendation is to see the second parade of the night. It’s usually less crowded and easy to find a seat right after the big “Disney’s Not-So-Spooky Spectacular” fireworks show, which is also new in 2019. Which ever parade you see, be sure to have a seat early enough to see the ride of the Headless Horseman.

If you love to see Disney characters dressed up in their Halloween costumes, hang out with villains, and enjoy other spooky fun Mickey’s Not-So-Scary Halloween Party is the place to be. The additions to the Boo to You parade are just part of the new fun coming to MNSSHP this year. Disney has already announced a new interactive treat trail at Monsters Inc. Laugh Floor and attractions updated with new Halloween twists.