There’s more to the story. The evil fairy of Disney’s Sleeping Beauty had her own story told in “Maleficent” where it turned out she had somewhat justifiable motivations for her actions. Now that story continues in Disney’s “Maleficent: Mistress of Evil.” A new trailer was just released in its delicious.

Have to say that a showdown between Angelina Jolie and Michelle Pfeiffer is the rivalry we didn’t know we wanted.

Here’s the general synopsis for Mistress of Evil:

The years have been kind to Maleficent and Aurora. Their relationship, born of heartbreak, revenge and ultimately love, has flourished. Yet the hatred between man and the fairies still exists. Aurora’s impending marriage to Prince Phillip is cause for celebration in the kingdom of Ulstead and the neighboring Moors, as the wedding serves to unite the two worlds. When an unexpected encounter introduces a powerful new alliance, Maleficent and Aurora are pulled apart to opposing sides in a Great War, testing their loyalties and causing them to question whether they can truly be family. 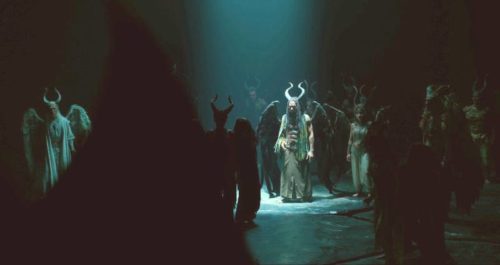 Unless we’re under some sort of spell, we expect to see “Maleficent: Mistress of Evil” when it hits theaters nationwide October 18, 2019, just in time for Halloween!