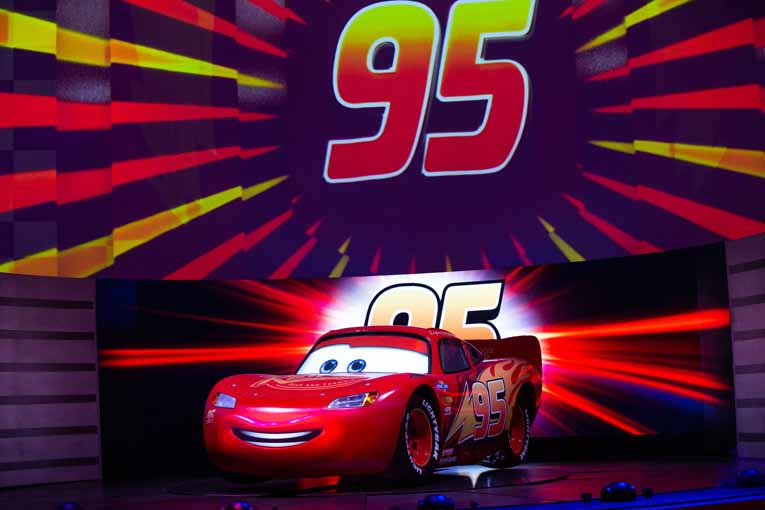 The green flag is out for Lightning McQueen’s Racing Academy at Disney’s Hollywood Studios and guests are enjoying the show. The brand new attraction invites guests into the world of Pixar Animation Studios’ Cars films to become rookie racers and learn the rules of the road from Piston Cup Champion Lightning McQueen and his friends.

To see the new attraction head down Sunset Blvd past Rock’n’Roller Coaster starring Aerosmith to Sunset Showcase. The location on the far opposite side of the park from Star Wars: Galaxy’s Edge will make it a great place to escape those crowds and enjoy some air-conditioning.

The fun actually starts outside in the courtyard leading into the Sunset Showcase. There’s DJ, the musically inclined car from the Pixar Cars movies and Cruz Martinez from Cars 3. There is also a team of cast members with a little show and some games for kids to play in.

The attention then shifts to inside the building where guests get some pre-show entertainment with trivia from the Cars movies and safety instructions from Mack the Truck. Then the show begins.

The show is about 10 minutes long and is suitable even for those not familiar with the story of Lightning McQueen. Those who do know the Cars stories will be happy to see many familiar faces. Tow Mater, Sally, and other characters from the films all make an appearance at various steps along the way.

The main thrust of the experience is Lightning McQueen teaching the audience how to be champion racers like him. The fun of the attraction is seeing Lightning McQueen right there in front of you, real as could be.

There’s a lot more to Lightning McQueen’s Racing Academy than just learning to race. While we would have preferred that Disney do something more with the Cars franchise at Walt Disney World, we were very pleased with the show.