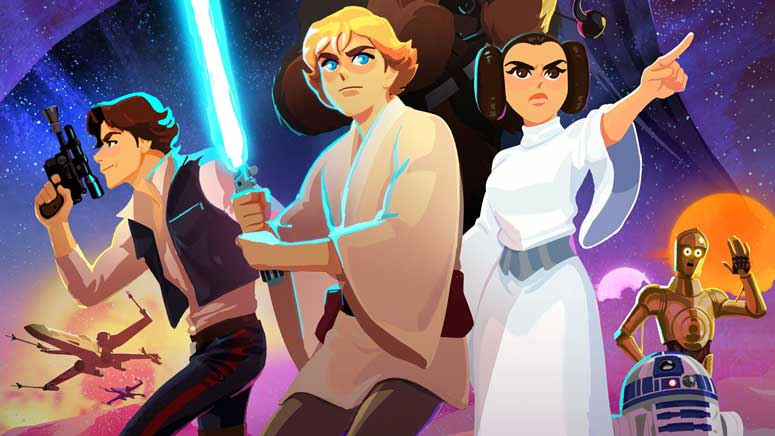 A new Star Wars Kids website and YouTube channel will allow Disney to introduce a new generation of younglings to the stories, themes, and characters of the Star Wars saga. Starting November 30th, six shorts with a decidedly anime look and feel, will help launch the new effort from Lucasfilm.

The shorts will combine original dialogue, music, and sound effects with bold new animations. The effort will also include educational add-ons designed to help older fans, parents talk to the younglings in their lives about the galaxy far, far away.

“With Galaxy of Adventures, we wanted to craft something that allowed parents to help their kids take their first step into a much larger world whether they were ready to show their kids the films or wanted to find new ways to explore the content,” said James Waugh, Lucasfilm’s vice president for franchise content and strategy.

Check out the retro-fantastic trailer here.

Does anyone remember that fan-led effort to release an anime version of Star Wars. Looks like they’re finally getting their wish.

Clearly the goal is to introduce some of the older Star Wars stories to a new generation of fans whose exposure with Star Wars starts with Episode VII, Star Wars Rebels, or even the more recent films or animated TV shows.

Get more details about Star Wars Kids and the new animated Star Wars Galaxy of Adventures shorts over on StarWars.com