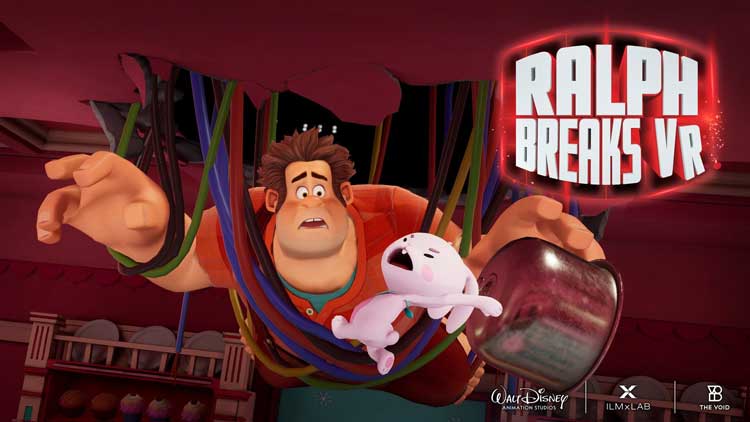 As a past participant in the Disney Accelerator program, the VOID VR Experience has Disney roots. Additionally, two of the big three VR experiences include partnerships with ILMxLAB and there are locations at both Disney Springs in Orlando and Downtown Disney in Anaheim. It’s practically a new attraction, of course it does cost more. The newest addition is “Ralph Breaks VR” an extension of Disney’s “Ralph Breaks The Internet” animated feature with help from the same folks who worked on the film at Walt Disney Animation Studios.

The Disney Blog was invited to give the new immersive virtual experience a try as part of a media preview and the new show really does break out of the mold for VR experiences. Players join everyone’s favorite videogame bad guy Wreck-It Ralph and his best friend Vanellope von Schweetz in a whole new experience that puts guests right in the middle of the action—literally.

Before you log on to the internet, you are given some early training and get to choose which Netizen you wish to play. You then get dressed in The VOID VR backpack and team members check to make sure everything works before you enter the game. 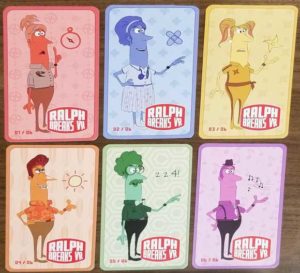 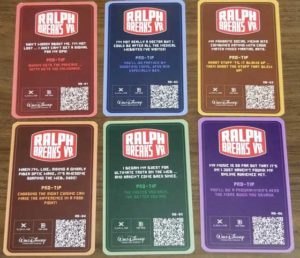 In our experience, once you donned the VR gear and logged on to the game, the real world became the virtual world. Your fellow players were now Netizens and as you moved through the world it really did feel like you were in the world as created by Disney animation and populated by Ralph, Vanellope, and the other internet creatures.

The experience is 4-D thanks to haptic feedback and environmental changes like smell and heat. There’s also a handy scorecard you ‘wear’ right on your wrist, like a watch. Unlike the Star Wars version, Ralph Breaks VR really does require cooperation among the team to play it well. That said, the gameplay is relatively easy to pick up, you mostly use a weapon to shoot at either Space Invaders or to defend yourself in a food fight. We had a lot of fun on our run-through. 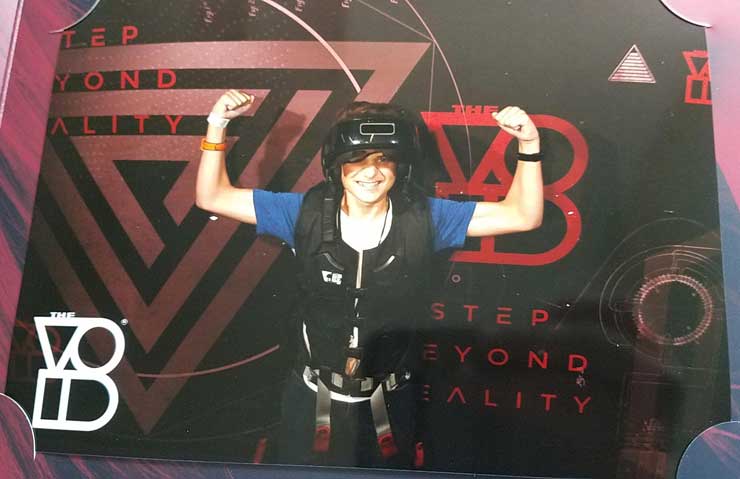 Side note: Seems like there’s an opportunity for a photo that includes a couple of the characters from the game. The photo with the gear on it is great, but it’s not a memory of what you encountered in the game.

There is a height limit of 48 inches as you have to be able to support a heavy backpack and visor set. But the team members at The VOID are very helpful and make sure it’s securely fastened before you set out. Team members are also around to help you during the game if you need assistance for any reason.

The VOID and ILMxLAB also collaborated on last year’s Star Wars: Secrets of the Empire, a virtual reality experience that enabled teams of players to run around inside a shared environment and compete against Stormtroopers. For Ralph Breaks VR, instead of blasters and lava, guests will launch pancakes and milkshakes against evil bunnies, kittens and drones. In designing the new experience, the teams at The VOID and ILMxLAB tapped into the latest VR technology as well as the physical setup of the space to ensure that Secrets of the Empire is not leaving. Instead, The VOID is able to offer guests the option to choose either Star Wars or Ralph Breaks VR.

In Ralph Breaks VR, groups of four players, disguised as characters from the film called “Netizens,” break into the Internet with Ralph and Vanellope to play the newest, coolest video game ever. And as can be expected, everything goes wrong—which is where the fun begins! 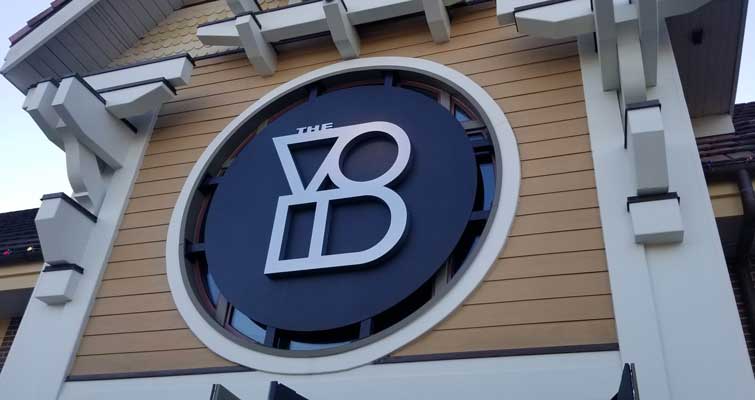 In addition to writing, Ribon also lends her voice to a brand-new antagonist for Ralph, Vanellope and guests to face off against: B.E.V., which stands for Built to Eradicate Viruses. “B.E.V. is the security cam who’s chasing Ralph and Vanellope and the players as they move through the Internet,” Ribon says. “When she finds something that’s not supposed to be in the Internet, her job is to eradicate it.”

B.E.V. was actually a character in earlier iterations of Ralph Breaks the Internet, but had to be let go as the story evolved. “We’ve always had a fondness in our hearts for B.E.V.,” says Ribon, “so when Ralph Breaks VR needed a villain, I thought, ‘Oh gosh, we have one.’”

Ralph Breaks VR is unique in that players actually move around inside the warehouse-sized space, talking to each other, helping each other. Players physically move from room to room, with each location a different candy-colored virtual space in Ralph’s world, including the Pancake Milkshake Diner, where players get to launch pancakes and milkshakes to help rescue Ralph. The total guest experience is approximately 30 minutes from check in to check out.

“There is nothing more magical than stepping inside a rich animated world—especially one filled with color, life, humor and delightful characters, as is the case with Ralph Breaks the Internet,” says Vicki Dobbs Beck, Executive in Charge at ILMxLAB. “The launch of this project marks another successful collaboration between ILMxLAB and The VOID, with the incredible opportunity to work alongside the talented teams at Walt Disney Animation Studios. Ralph Breaks VR is an experience that brings a smile to your face and the desire to have another go around with friends and family.”

Beck goes on to explain that the developers were able mitigate the “motion sickness” which some guests occasionally experience with other VR attractions by matching the “virtual world” that guests see with what they perceive to be happening “in the real world.” Or, in other words, they’ve matched what you see with what you feel. For example, when guests see that they are moving on a virtual train, they also feel the vibrations of that train and the wind in their hair. “That’s what sets us apart,” she says. “We match the inputs that are coming into your mind with what you’re actually feeling.”

“Designing the elements that pull you irresistibly into the unique world of Ralph and Vanellope has been an incredibly fun process,” says Curtis Hickman, chief creative officer and co-founder of The VOID. “What we’ve created together with ILMxLAB is an astounding adventure that allows people to experience a unique extension of Ralph Breaks the Internet’s characters, environments and stories.”

Pricing starts at $30 a game and is available in 7 locations (beyond Orlando and Anaheim there’s: Glendale, Ca., Las Vegas, NV., West Plano, TX., and two in Canada – Edmonton and Toronto).

Tickets for Ralph Breaks VR are now on sale at www.thevoid.com. We recommend making reservations online in advance, as there is often limited walk-up availability.